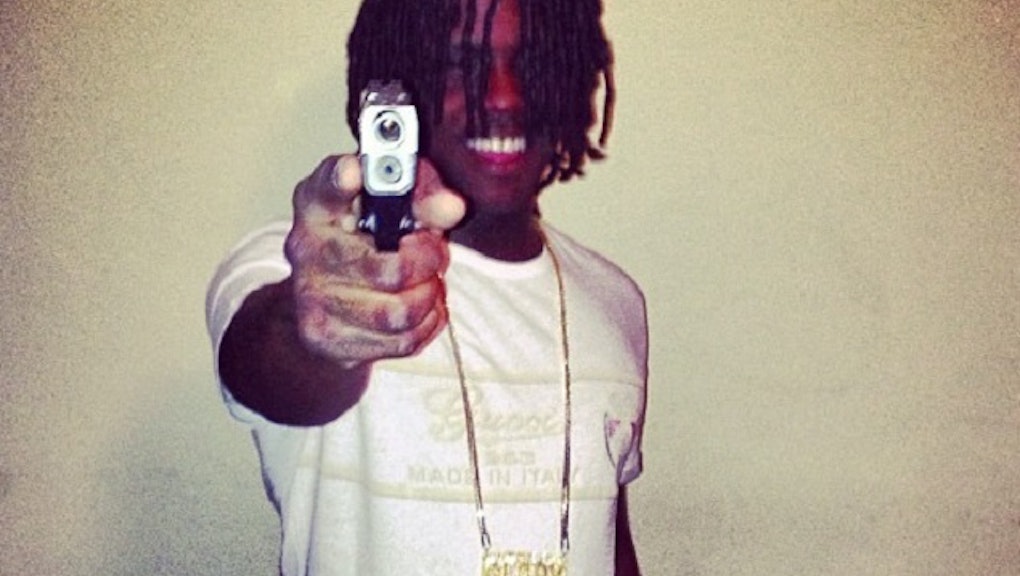 This is a sad story.

In September of 2012, Chicago rapper Lil JoJo, 18 at the time and pictured below, was shot and killed shortly after a social media argument heated up with fellow teenage rapper Chief Keef (Keith Cozart, pictured above).

Keef sent the below tweets after JoJo's death (LMAO stands for "laughing my ass off.")

"Just about any teenager in Chicago today can tell you the story of Chief Keef and Lil JoJo, two rappers from the South Side whose songs serve as anthems for their rival gangs," Wired wrote in September.

JoJo had apparently tweeted his location just before the shooting occurred. He was riding a bike and was shot in the back multiple times as he was running away from the shooter.

This story in itself is tragic, but it also highlights a deeper trend in the internet age: Gangs are increasingly turning to social media to advertise their illicit activities and gang affiliations, and police officers are combing through social media networks to uncover it.

"Young people in these areas are like young people everywhere, using technology to coordinate with their friends and chronicle their every move. But in neighborhoods where shootings are common, the use of online tools has turned hazardous, as gang violence is now openly advertised and instigated online," Wired wrote.

In New York City, for example, monitoring of social media is playing a bigger and bigger role in policing. According to the New York Times, "As the department de-emphasizes stop-and-frisk tactics, it has assigned scores of street officers to patiently pursue longer-term investigations against neighborhood gangs, particularly the youth gangs known as crews or sets." The New York Daily News reported, "The NYPD has formed a new unit to track troublemakers who announce plans or brag about their crimes on Twitter, MySpace and Facebook."

In an interview, a New York City gang detective, who preferred to remain anonymous, said that once people start posting their illicit gang activity on social media or in videos, it's fair game for investigation. Several months ago, when the NYPD took down the WTG gang, a subset of the Bloods in the Bronx, it was mainly because the gang members had been rapping about their criminal activity and showing firearms and large amounts of cash in photos online.

The misconception, however, is that the arrests happen overnight. The unnamed detective said that it takes "months and months and months of investigating, a lot of time invested and a lot of manpower" before gang members are charged. He added that during debrief sessions at the precinct, "They like to brag. It's actually very surprising."

He explained that gangs are extremely organized, with "lieutenants" at the top, and "soldiers" — who remain stationed at a specific post in the neighborhood — working beneath them. Then there are affiliates and "runners," who are younger. The detective has not been able to catch the higher-up members; they're much harder to get. Most of the gang members he sees belong to the Bloods, Crips, or Latin Kings.

So far, the detectives have charged and brought in people who are typically 16 to 24 years old. "They feel invincible," he said. "They've been arrested five, 10, 15 times, and serve 30 days." Sure enough, Chief Keef once rapped, "Bodies drop, we beat the case; My Jew lawyer defeat the case."

Which raises the question: As the NYPD scales back on stop-and-frisk under new mayor Bill de Blasio due to privacy and racial profiling concerns, does monitoring personal online accounts pose the same problems? We need to strongly consider whether the tactic raises the same profiling and privacy issues, just in virtual form.

But most should be aware that these days, nothing on the internet is private.