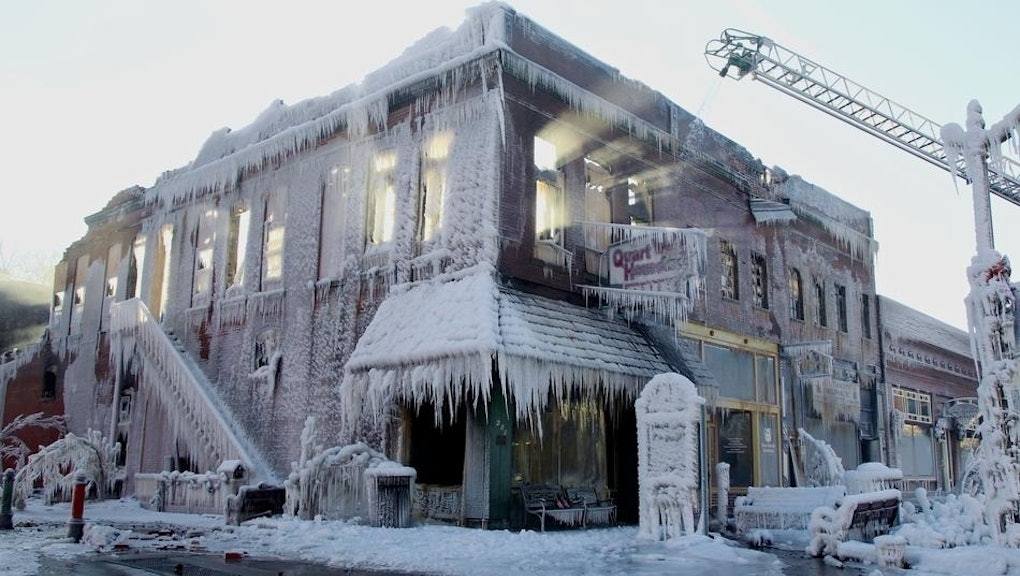 So yesterday was pretty cold, huh? The polar vortex had every single one of the 50 states drop below freezing at some point yesterday. At least we were all in it together, right?

According to forecasts, we seem to be through the worst of it. The weather will still be cold for the next few days, but it won't be brutally, life-threateningly cold.

But while we were all locking ourselves indoors under as many blankets as we could get our hands on, watching the virtual fireplace on Netflix, the cold made for some pretty crazy news stories:

1. An escaped convict turned himself back in to get out of the cold

It was so cold in Kentucky on Monday that an escaped convict turned himself back in just to get out of the cold. Robert Vick, a 42-year-old serving a six-year sentence, walked out of the minimum security prison in Blackburn, Ky., on Sunday evening. He was confirmed missing at 8:35 p.m. that night. But he didn't last long.

According to NBC News affiliate LEX18, Vick walked into a motel a few miles from the prison and asked the clerk to call the police and report him. When law enforcement officials arrived, they found Vick shivering and covered with frostbite. A spokeswoman for the state corrections department said Vick would have only been wearing his khaki prison uniform at the time of his escape — no match for the brutal cold, even in Kentucky.

Let this be a lesson to convicts everywhere: If you're going to escape, do it in the summer. Or at least check a weather report first.

2. Man Finds Refuge From the Cold in a Grocery Store Freezer

Kevin Stoick, a grocery store manager in Fargo, North Dakota, got out of the cold on Monday and into the warmth of his freezer. Sure, the temperature in the freezer was set to -10 degrees, but compared to the reported windchill temperature of -40 degrees in Fargo on Monday, the freezer was a tropical paradise.

"The only plus about working in the freezer is there's no wind chill," Stoick told Fargo's Forum. "It's pathetically miserable outside."

Hey, whatever works. I'd hang out in a freezer too if it felt 30 degrees warmer than the temperature outside. That's the polar vortex for you: sending people running to their refrigerators to warm up.

3. Firefighters Hose Down Burning Building and Make Something Beautiful

Not everything about the polar vortex was the worst, I guess. The extreme cold did make for some beautiful photographs, perhaps none better than this building in Nebraska.

When it caught on fire, firefighters tried quenching the flames by spraying it down with water. But remember, it was freezing cold in Nebraska, so the water turned to ice nearly instantly, leading to a beautiful, ice-covered wonderland. I'll let the pictures speak for themselves: