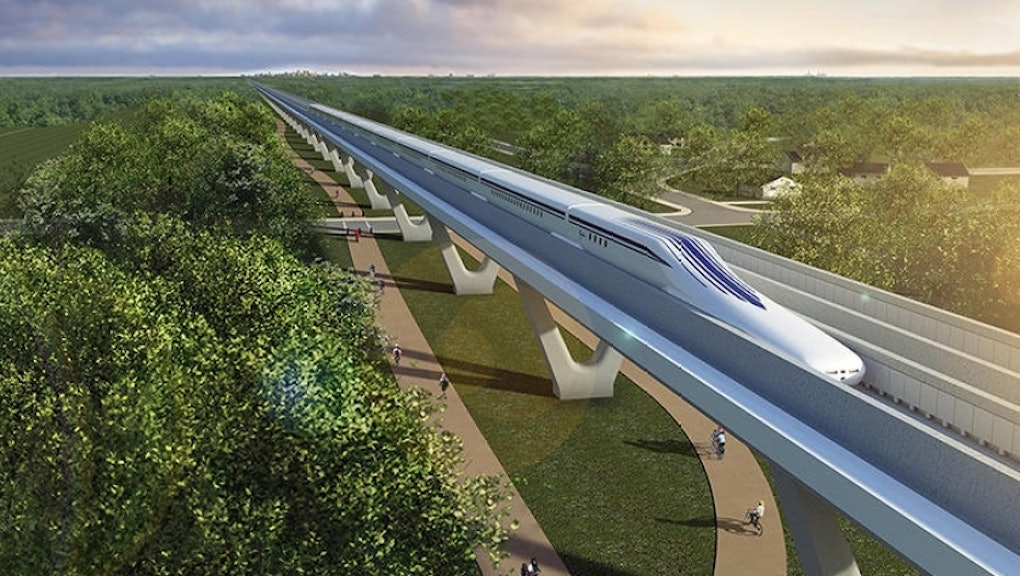 This Train Would Get You From D.C. to Baltimore in 15 Minutes — But America Will Never Build It

The news: Tokyo is so excited about its "Super-Maglev" train technology — which could take a commuter from Baltimore to Washington, D.C. in 15 minutes — that the Japanese government has offered to cover half the cost of building a rail line between these two cities.

Japan's Asahi newspaper reports that the Japanese government will provide half of the estimated $8 billion cost of constructing the tracks, in the form of loans. Central Japan Railway Co. says that both the federal and state governments are keen on the project, which could reduce the 37-mile commute between Baltimore and D.C. from one hour to one-quarter that time.

Maglev trains use high-powered magnets to float above the track, allowing them to reach unprecedented speeds. The new Japanese trains run up to 310 mph; the latest Series L0, revealed in late 2012, measures 92 feet long (49 of which form a nose section) and has 24 seats. The eventually finalized design can carry up to 1,000 passengers. The lines are expected to go into operation in Japan by 2027, connecting Shinagawa Station in Central Tokyo with Nagoya. By 2045, the line will reach Osaka at a total cost approaching $105.4 billion.

Unfortunately, it's probably still not going to happen. Large-scale infrastructural projects in the U.S.? Are you dreaming? As PolicyMic's Nina Ippolito has previously noted, the federal government can't even fund Amtrak to adequate levels, and has previously botched the "modest" Acela high-speed rail project. And BusinessWeek noted that Americans won't even spend money on a new tunnel across the Hudson River, which could relieve some of the New York City-New Jersey route's crippling traffic.

Meanwhile, China is running into massive problems of its own on the Maglev lines, including the availability of cheaper transit options (such as the subway) and the necessity of switching to local transport when commuting. One Beijing professor even referred to the Maglevs as "nothing but a 'transport toy.'"

And it would cost a lot more than $8 billion. Slate notes that Amtrak is asking for $7 billion to renovate Union Station alone, while a single MTA tunnel to let Long Island trains go to Grand Central in NYC is expected to rack up $8.76 billion. The idea that the U.S. could build an Eastern corridor train line for $8 billion is laughable, seeing as U.S. infrastructural projects cost (for many deep-rooted reasons) far more than their European or Asian counterparts. Meanwhile, lots of people still remain skeptical about public transportation (just think about Detroit's People Mover, for example).

So while it sounds nice, don't expect to see these trains coming to the U.S. anytime soon.