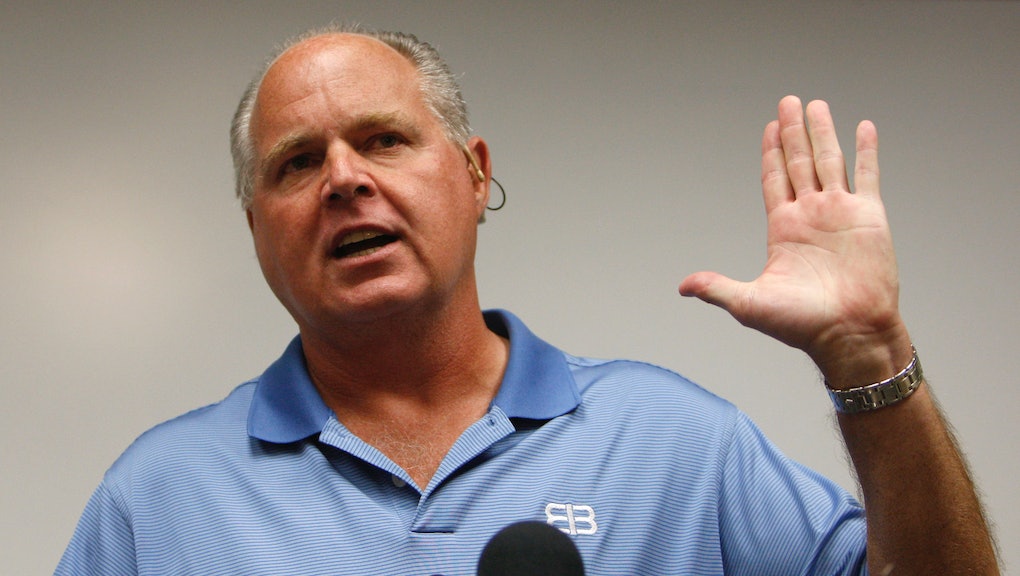 With most of the country under a historic cold spell, there have been several conservative outlets questioning the legitimacy of global warming. Unsurprisingly, radio shock jock Rush Limbaugh is leading the pack, calling the polar vortex a liberal "hoax." On Monday, Limbaugh took to his controversial show to take down what he views as a liberal agenda in the field of meteorology:

"We are having a record-breaking cold snap in many parts of the country. And right on schedule the media have to come up with a way to make it sound like it's completely unprecedented. Because they've got to find a way to attach this to the global warming agenda, and they have. It's called the 'polar vortex.' The dreaded polar vortex."

Limbaugh then went on to call the polar vortex "a crappy science fiction movie" — perhaps he was thinking about The Day After Tomorrow? — and asked, "Do you know what the polar vortex is? Have you ever heard of it? Well, they just created it for this week."

But Limbaugh — along with his weather expert colleagues, such as Donald Trump and Rep. John Fleming (R-La.) — doesn't seem to understand that climate change is a matter of science, not politics. And the scientific community is fed up.

"Well the problem is, with climate change now, you can't have a debate. And I think that's the problem," Rayno said in his response. "Two sides have been dug in. And now, any time anybody tries to have a debate, it turns into being politicized. Whenever you politicize something, you contaminate it."

He also touched on the argument Limbaugh and other conservatives have made, which is that the current cold spell disproves the idea of a warming planet. "Even meteorologists that are on both sides of this argument, whether they are for believing in climate change or against it, we all agree on one thing: blaming climate change on one event is absurd, silly, and there's absolutely no proof."

Translation? The polar vortex neither disproves nor definitely proves climate change, so let scientists do their work.

As for Limbaugh's assertion that the media came up with the term "polar vortex" just this week, Rayno had a clear answer. "We've been using the name in this field for — I've been in this field for 25 years, this isn't anything new," he said. "Usually meteorologists would never even use that term because people wouldn't understand it."

And if you need any more proof, celebrity weatherman Al Roker has the goods:

And if you're interested in the actual science behind this weather phenomenon, you can check out some of these links.