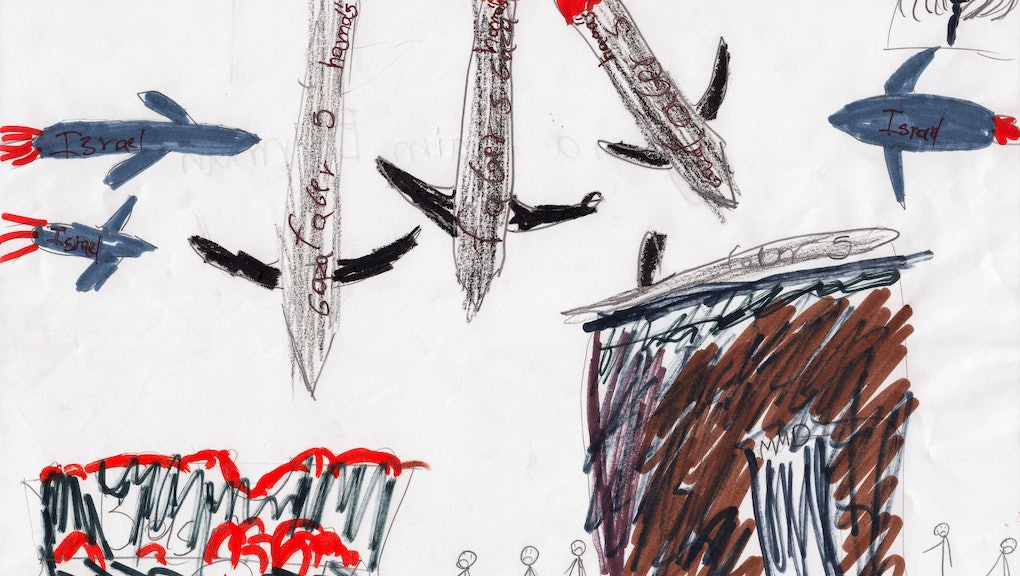 Powerful Photos Show You What War Looks Like in Children's Eyes

Less than a week after a bus exploded in Tel Aviv in 2012, photographer Brian McCarty was on his hands and knees in the place where it happened, being careful to avoid getting cut by the shattered glass that was still on the ground. He took a toy bus, set it on the street, lit it on fire, and snapped a photograph.

The photograph is part of a project called "WAR-TOYS." Working with local groups that provide therapy through art and play to the children caught in the conflict, the children, ages 8 to 12, are asked to draw a picture of anything they want to share. Often, McCarty says, their drawings are violent, which is likely a product of the conflict-ridden world in which they live. That's when McCarty went to find toys in local shops to set the scene.

The boy that drew the bus could've drawn an innocent landscape if he wanted, but instead, he drew rockets, flames, and a burning body:

A boy drew this picture after he returned home after being evacuated from Sderot, a town near Gaza that had been the target of rockets. Two days had passed since the Tel Aviv bus bombing.

These photos and drawings illustrate the salience of conflict in the lives of the children, says McCarty, who further says that violence is something the children might not be able to discuss, but still feel. Often, but not always, the photos depict an event that the children actually observed.

To obtain these photographs, McCarty traveled to the dangerous places where these children live.

"My work has always been about explaining and documenting a moment, as much as it is fantasy-based. To do that I have to go to these places and experience these things," he told PolicyMic.

The project has taken McCarty to Israel, the West Bank, and Gaza. He has plans in the works to photograph in Afghanistan, Sudan, and Colombia. McCarty wants to show how each conflict, no matter the circumstances, affects children in similar ways. There are clear differences between Israel and Palestine, but McCary says that the trauma and fear conveyed by the drawings and photographs remain the same.

"I'm trying as much as I can to give a global perspective on war," he said. "My goal is not to be political, not to focus on only one conflict, but on the unifying impact of conflict. That the kids from one place to another can have similar experiences says a lot."

Here are some of the photos he worked on in conjunction with the United Nations Relief and Works Agency, the Israel Trauma Coalition, and the Spafford Children's Center: