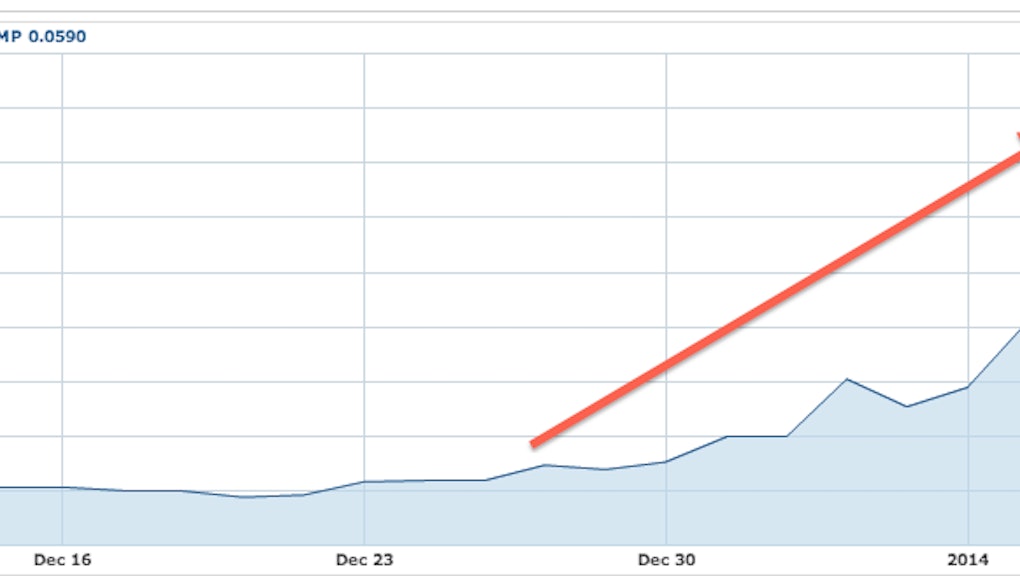 The news: It’s no surprise that the marijuana economy is doing gangbusters since Colorado legalized recreational pot on January 1. Sales in the state topped $1 million on the first day of legalization – which could have other states lining up to do the same.

As a result, marijuana companies are seeing their stock values skyrocket.

Check out Hemp Inc above. Sure, it’s a penny stock, but it’s a stock that has spiked 205% in three days. Some marijuana companies are seeing spikes over 1,700%.

What’s going on? Because these companies’ values were so low at the beginning, the increases they’re seeing are that much more dramatic. Take GreenGro Technologies Inc., for example. Its shares just hit 80 cents. I know what you’re thinking – 80 cents? Really? But that’s an increase of 1,714%. Shares of a company that sells marijuana in Colorado, Tranzbyte Corp., are barely over a penny, but that’s more than a 300% increase. These stocks are worth pennies, and they’re being traded in huge quantities. It’s insanity.

Which has some concerned that this is a bubble. Which is good, because it probably is. People are crazed over marijuana right now – “The demand for marijuana is insatiable,” says one trader – which means stock prices for pot companies are inflated. It’s a “feeding frenzy for the birth of a new industry.” Gains like these aren't sustainable for long.

Earlier in 2013, financial regulators warned us to be wary of dubious pot companies. Novice traders could get taken for a lot.

Once the commotion calms down, so too will the stock price of these companies. But for now, legalization has business booming – hopefully it doesn’t go up in smoke.