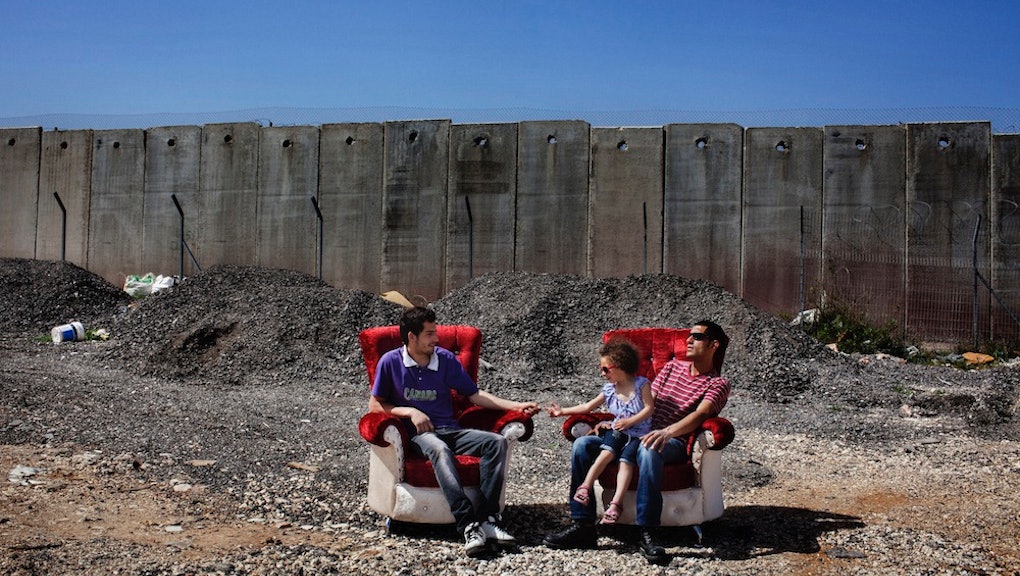 From the series Occupied Pleasures, West Bank : Two furniture makers take a break in a pair of plush armchairs (of their creation) in the open-air in Hizma, against Israel's 26-foot high Separation Wall. 2013

Tanya Habjouqa is an award-winning photographer born in Jordan and raised in Texas. She received her masters in London and currently lives in East Jerusalem and is known for gaining unique access to social stories in the Middle East and photographing subjects ranging from drag queens and heroin addicts in Jerusalem to wives of the Syrian revolution to Arab body builders.

Most recently, she received funding from the Magnum Emergency Fund for her project "Occupied Pleasures," which is a series of photos showing unique ways Palestinians find pleasure in life despite the occupation, recently featured in the New York Times.

Over the weekend, I caught up with Habjouqa about the success of her most recent project and her experiences on the ground combatting the mainstream media's narratives about Israel/Palestine.

Anna Lekas Miller: How does your personal identity play into how you select your subjects?

Tanya Habjouqa: I was born in Jordan to a Texan mother and a Jordanian father. My parents separated and I went back to Texas. I would go back and forth between countries, coming to visit Jordan during the summers.

When I was 15 and rebellious, my mom sent me to live in Jordan for a year as a sort of punishment. This was two weeks before the Gulf War broke out. It was pre-Satellite, and of course pre-Internet — but because of the proximity of the countries, I could pick up Syrian news, Israeli news, Iraqi news and Jordanian news. I would literally flip between channels, fascinated at how the narrative was being twisted in each place. It was not the same story!

So identity — and really narrative — caught me at a young age.

From the series "Transexuals of the Holy Land": An Israeli cross dresser and a Palestinian transsexual chat with 'Eman'--renowned Palestinian drag queen during a break from her show in a Jerusalem gay club, where the only wall between the people is a dressing room.

ALM: When did you decide to go back to the Middle East?

TH: I was there for that one year when I was 15. Later I took a break from university and did a year at the Jordan Times. At that point, I knew that it was where I belonged — not necessarily Jordan, but the region.

Eventually, I came to Palestine and went purely freelance and started pitching my own social stories. I started exploring understandings of the conflict because I was tired of the media's narrative.

Living here, now more than ever made me feel this way. Having children who are Palestinian, experiencing racism first-hand when my husband, who — even though he has an Israeli passport — was attacked at a mall in front of me and our 2-year-old daughter has shown me that I can't regurgitate the same tired tropes of Israel/Palestine. I have to think about how I can explain this conflict differently — how can I get people to think, to feel.

ALM: You frequently mention these "tropes" about Israel and Palestine and your desire to break those in your work. Can you elaborate?

TH: If you stick to the purely visual analysis, when someone says, "Palestinian" what is the first thing that comes to mind? A kid throwing rocks. A woman throwing her hands in the air — it's extremely black and white and bipolar. You never get the context or the nuance of why people are resisting here, and that is very problematic in the story-telling.

I also find journalists' approach to balanced reporting here to be problematic. In their attempt to be so called "balanced," they think that if you are reporting on suffering on the Palestinian side, you have to try to find suffering on the Israeli side. But that is not the way to approach this. You have to put things in context — and that is rarely — or not often done in the mainstream media.

ALM: How did this desire to work outside of the media narrative lead you to "Occupied Pleasures"?

TH: While exploring the "Women of Gaza" series, I found myself in a lot of unique situations. I was interviewing this guy who had snuck his bride across the tunnel to get married. He was recounting this tale to me:

"Yes, yes, yes, you know, we tried, but they wouldn't give her the visa. We spoke on Skype every night and finally, in desperation we got her in through the tunnel. She came wearing her dress. When I met her in the middle of the tunnel, she was there in her white dress, covered in dust and trembling in fear and suddenly it felt like a Bollywood movie — and I took her, and I kissed her."

I knew there was something there.

ALM: Palestine is a fragmented place — and privileges and rights vary so much depending on whether you are in '48, Jerusalem, the West Bank or Gaza. How did you encounter this in your work?

TH: I almost felt guilty — as a non-Palestinian, I am so privileged to enter all of these realities.

For me, in some ways, this project — aside from bringing to light the wonderful narrative of who these people are, how they managed to keep their humor and warmth and community — brought Palestine together — at least bringing Jerusalem, the West Bank and Gaza — into a narrative where they can see ... and be reminded of one another with other than hard news, demolitions and drones.

See the rest of Tanya Habjouqa's work on her website.