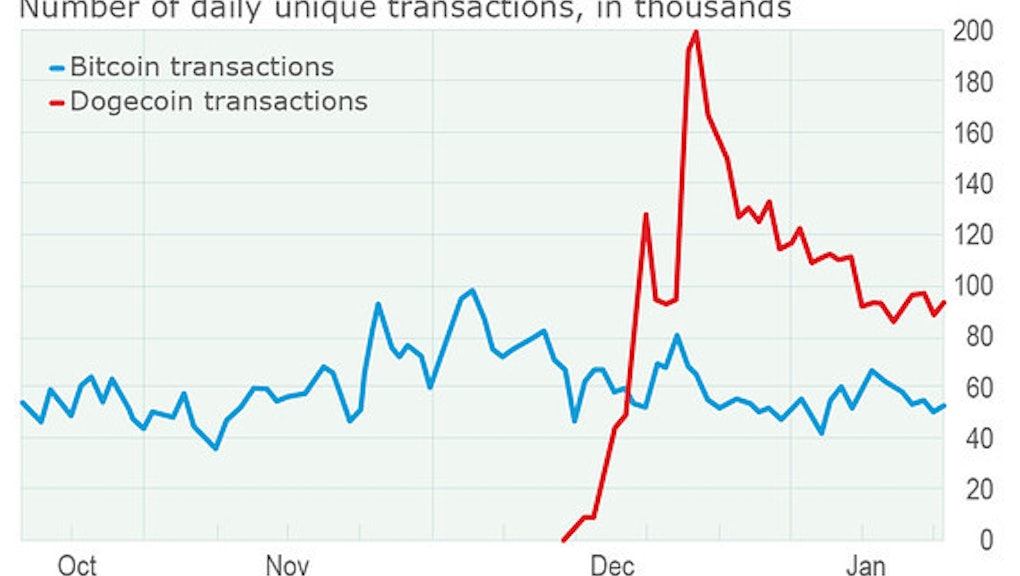 Bitcoin vs. Dogecoin: Which One is Really Worth More?

In other words, I'ma let you finish but dogecoin is the most-transferred cryptocurrency of all time (sorry Coinye).

And Market Watch went ahead and chartified that for you:

So money. Much wowe.

Here's why that makes sense: These statistics only cover how many dogecoins are being transferred, not how much they're worth.

One bitcoin is worth around $825 as of Jan. 14. One dogecoin is worth $0.00031, or basically nothing. The total market capitalization of all bitcoins is over $10 billion, while the total worth of all dogecoins is over $9 million.

In other words, bitcoin is being used for big boy purchases and large-scale transfers, while dogecoin is primarily being used to transfer small amounts of money around the world. The dogecoin subreddit even has a bot that randomly hands out 100 dogecoins to users or instantly transfers them between users at their discretion.

So what's it useful for? Mostly fun! According to Spelunk.in's Pinguino, "dogecoin is very very silly, and very fun. Currently, people are mostly buying Steam games and the like with it."

The creators hope that it will be remembered as "the fun cryptocurrency" and that it can be used for small purchases like video games or toys and spread via "tipping" on message board and as prizes.

Eventually, dogecoin might be widespread or accepted enough to shop at regular outlets with — but don't expect many people to get rich with it, seeing as the low value and huge number of dogecoins make hoarding much more difficult. But in the meantime, long live doge. Such success.