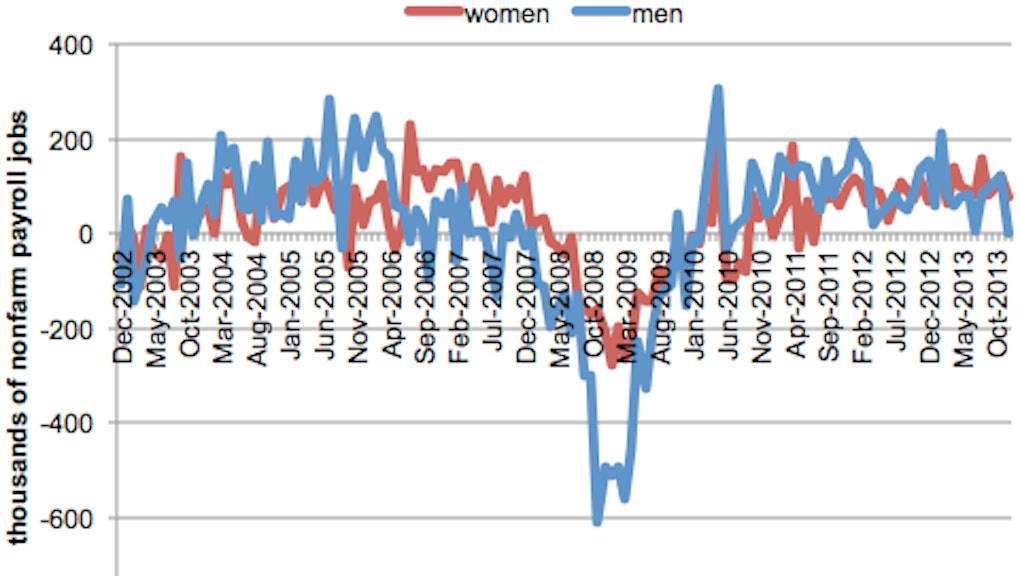 The news: December 2013 was the month the economy decided to say hello, ladies.

Oh, and fellas? Apparently the economy wouldn't hire you if you were the last man ... in the economy. According to new data from the the Bureau of Labor Statistics, every single one of the paltry 74,000 jobs created in December went to women.

Check the chart from the New York Times below:

Women gained a net 75,000 jobs in December, while men lost 1,000 net jobs. And even though women haven't been the sole beneficiaries of job growth in a single month since December 2007, they claimed 56% of all new jobs over the past 12 months.

Men also fared far worse during the recession, thanks in large part to their concentration in male-heavy industries like construction, manufacturing, and chopping down trees using only your teeth. Meanwhile, women are concentrated in recession-safe industries like health care and government.

Girl power? Ladies, you're not really gonna like this part. The report isn't necessarily great news for women, either. Most of the jobs created weren't good ones.

Just 15,000 of the positions that went to women were in the professional and business services sectors, which tend to be higher-paying positions. But 39,000 were in retail, and 18,000 were in leisure and hospitality. If you've ever worked in either industry, you probably didn't enjoy the low pay, long hours, and dealing with customers, and it's not likely the women filling many of those positions will either.

Meanwhile, the 74,000 jobs created are far short of the 196,000 jobs Wall Street expected. It was a sour month for the economy, and many economists say that the official 6.7% unemployment rate is actually underestimating how many people are seeking work.

According to Economic Policy Institute economist Heidi Shierholz, unemployment would be counted at 10.3% instead of 7% if the government was counting people who stopped looking for work or never entered the economy at all.

Worst of all: While younger women have more than recovered from the recession, men lag behind. But it's not because women are doing better so much as men are doing worse. This economy isn't helping either gender, and full recovery still seems far away.