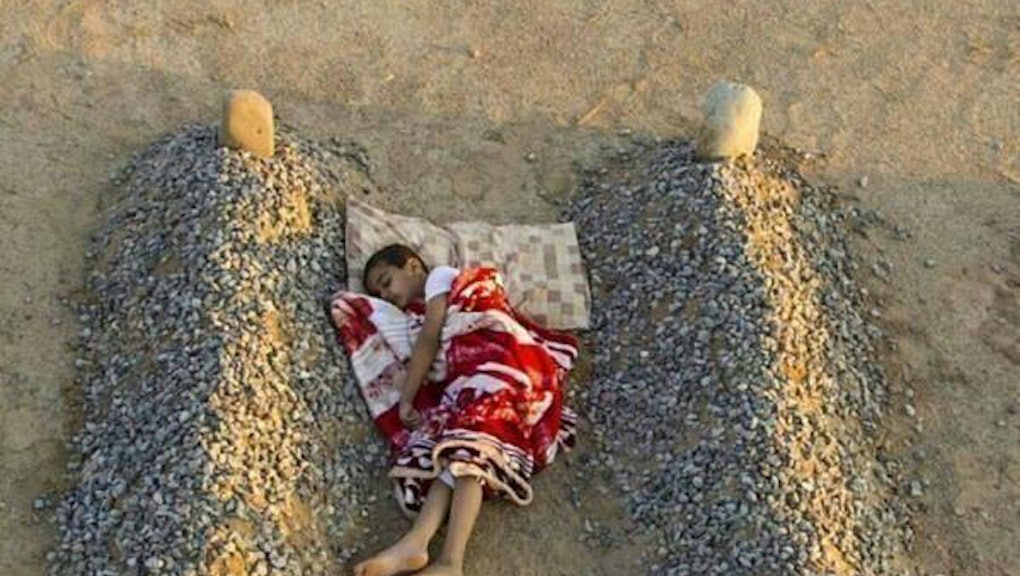 The news: If you've been on Facebook, Twitter or Reddit, chances are pretty high that you've seen this heart-breaking image of a young Syrian child sleeping between his parents. It's a wrenching testament to the devastating horrors of war and the pointless death occuring across Syria in the battle against President Bashar al-Assad's authoritarian government.

How'd it happen? According to Redditor Vagus85, the original photograph was actually from a Saudi photographer who says his intention was to build something like a grave to stage the shoot as abstract art. (How "abstract" it is might be a little up to debate, but it is what it is.)

Then, Syrian jihadists on Twitter picked up one of the images and spread it online to advance the anti-Assad cause.

The photographer, Abdul Aziz al-Otaibi, is pretty ticked off. He told Harald Doornbos that "Look, it's not true at all that my picture has anything to do with Syria. I am really shocked how people have twisted my picture."

"I love photography," he told Doornbos. "Every artist has ideas in his head. So I had the idea to make a project whereby I show in pictures how the love of a child for his parents is irreplaceable. This love cannot be substituted by anything or anybody else, even if the parents are dead."

The project was shot at Yanbu al Bahr, 150 miles outside of Jeddah in Saudi Arabia. It features his sister's young son, not the child of slain Syrian citizens. But an American Muslim convert living in Saudi Arabia, @AmericanBadu, tweeted it to his 187,000+ followers. Many Muslims, as well as jihadis, took the image at face value and promoted it further — then tricking Reddit into launching the image into the public sphere in the West.

"I am really very annoyed by this," says al-Otaibi. "It is just not fair to take one of my photos totally out of context and use it for your own propaganda."

The bottom line: You should be skeptical of much of the news coming out of Syria. Both Assad and the rebels have elaborate propaganda operations, though the state's far outstrips the opposition operations. Both sides have a vested interest in tricking you into believing their version of events.

And now, with rebel infighting fracturing the opposition, a solution to the crisis seems as far away as ever, heartbreaking viral images or no.