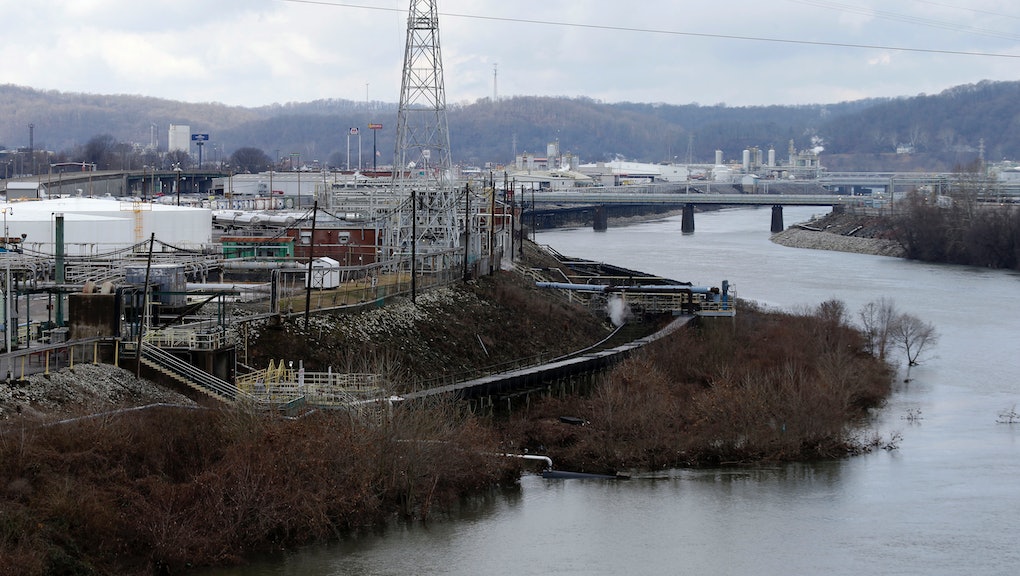 The news: Freedom Industries, the company responsible for a chemical leak that ruined 300,000 West Virginians' drinking water, is facing several local and federal lawsuits for their screw-up ... but they probably won't have to pay anything.

On Friday, Freedom filed for Chapter 11 bankruptcy, revealing the company owes $3.6 million to its top 20 creditors and more than $2.4 million in unpaid taxes to the IRS. Due to the nature of their Chapter 11 filling, all lawsuits against the company are put on hold while the company has time to reorganize and continue operations. Because plantiffs' litigation is halted by the filing, creditors will have to fight it out for a share of the company's remaining assets.

Additionally, about an hour after filing for bankruptcy, Freedom industries filed an emergency motion for "debtor-in-possession," or DIP, financing, which would secure the company an up to $5 million loan to continue operations.

This all means that instead of dealing with their lawsuits and the ramped-up payment demands from vendors, Freedom Industries will be protected by bankruptcy court protection while they "figure things out." They've pretty much dodged the bullet.

Shocker: Perhaps this move shouldn't come as too much of a surprise given the somewhat questionable background of the guys running Freedom Industries. According to some reports, one of Freedom's two founders, Carl Lemley Kennedy II, is an "edgy guy," who's been convicted of tax evasion and dealing cocaine. And we all know what a stand-up guy Gary Southern, the other co-founder, is.

In their bankruptcy filing, Freedom Industries listed assets and debts ranging from $1 million to $10 million each and it's been revealed that the company's late payments to the IRS go as far back as 2000.

This happens a lot: While it may not be looked on especially favorably, it's not uncommon for companies facing legal costs and damages following such accidents to file for bankruptcy to protect their assets. Just last August, Montreal, Maine & Atlantic Railway Ltd. filed for bankruptcy to protect itself from potential liability after one of its runaway oil trains exploded and killed 47 people in a Quebec town.

But while it may be a legal and financially savvy move, filing for bankruptcy does nothing to help the thousands of people who faced serious damages because of Freedom Industry's incompetency.