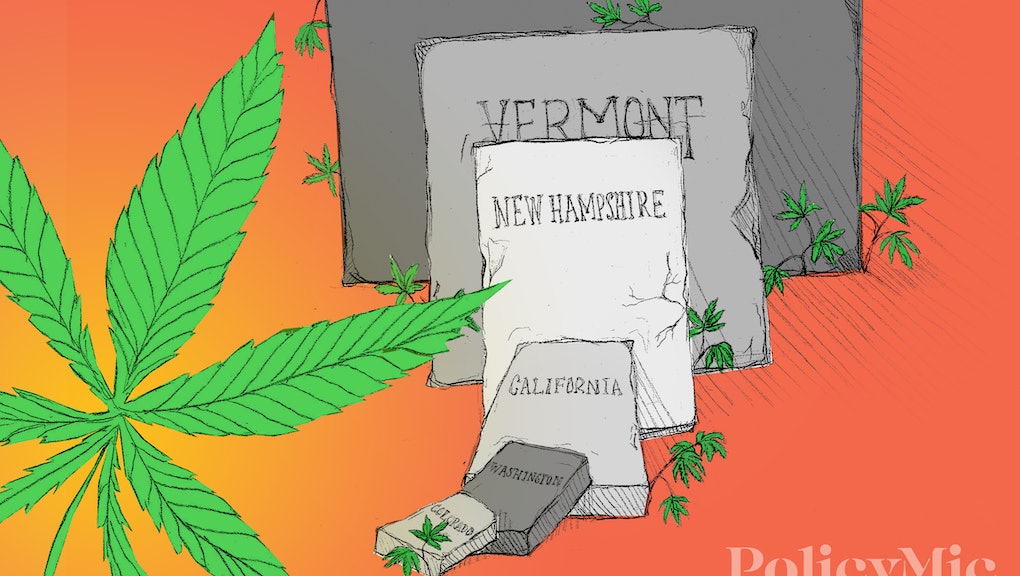 The news: Anti-pot watchdogs are warning: A marijuana legalization domino effect could be spreading across the East Coast.

Former Long Island Rep. Patrick Kennedy, one of the nation's most vehement anti-marijuana crusaders, warns that "The legalization of marijuana is moving fast in parts of the United States, and it looks as though the domino effect could quickly move to other states such as Vermont."

Last week, the New Hampshire House of Representatives became the first state house in history to vote in initial favor of a bill to tax and regulate the growth, sale, and possession of recreational marijuana, following on the coattails of newly-implemented laws in Washington state and Colorado that were passed by voter initiative. If it passes, New Hampshire would join the tiny city of Portland, Maine, as the only East Coast haven for recreational pot smokers.

Though the New Hampshire bill faces many challenges it's a historic first which has marijuana law reform advocates excited that they finally have the initiative. And it's paying off with a number of serious efforts to change laws at the state level across the East Coast. State lawmakers in Maryland are testing their mettle as well with a proposed bill to tax and regulate marijuana like any other legal vice like alcohol.

Is the East Coast on verge of a legalization domino effect?

The buzzkill: All of the initiatives face long odds. There's a reason that marijuana reform has never succeeded via the legislative process before — politicians are terrified of the ramifications of being perceived as soft on crime or as exposing the nation's youth to drugs.

The New Hampshire effort looks likely to go down, with difficulties including long odds in the House for actual approval, an unfriendly Senate, and a promised veto by Gov. Maggie Hassan, who thinks it's "the wrong message to send young people."

While a November poll found that 51% of Marylanders support marijuana legalization (with a 3.8% margin of error), Gov. O'Malley opposes reform, saying that marijuana is a "gateway to more harmful activity."

And Vermont hasn't introduced any bills at all yet, even though it's moved forward with decriminalization already. Perhaps sensing a difficult fight, the Marijuana Policy Project has made clear it won't be pushing a tax-and-regulate bill until 2015. There's some wiggle room: Gov. Peter Shumlin thinks the state is in a "crisis" of "drug addiction and drug-related crime spreading across Vermont," and dedicated his State of the State speech earlier in January to the topic. But unlike other drug war crusaders, he was a "standout" supporter of decriminalization and says he's open to a discussion on full legalization.

The upshot: Some legislators are seeing decriminalization measures as too weak to count as true reform.

“The problem with decriminalization is that it leaves in place the basic dynamics of criminal control over the supply of marijuana,” said Maryland state Sen. Jamie Raskin (D-Montgomery). “Our goal is to kick the drug dealers out of the state, and there is one way to do it, which is to regulate and tax marijuana – let the government take over the whole process.”