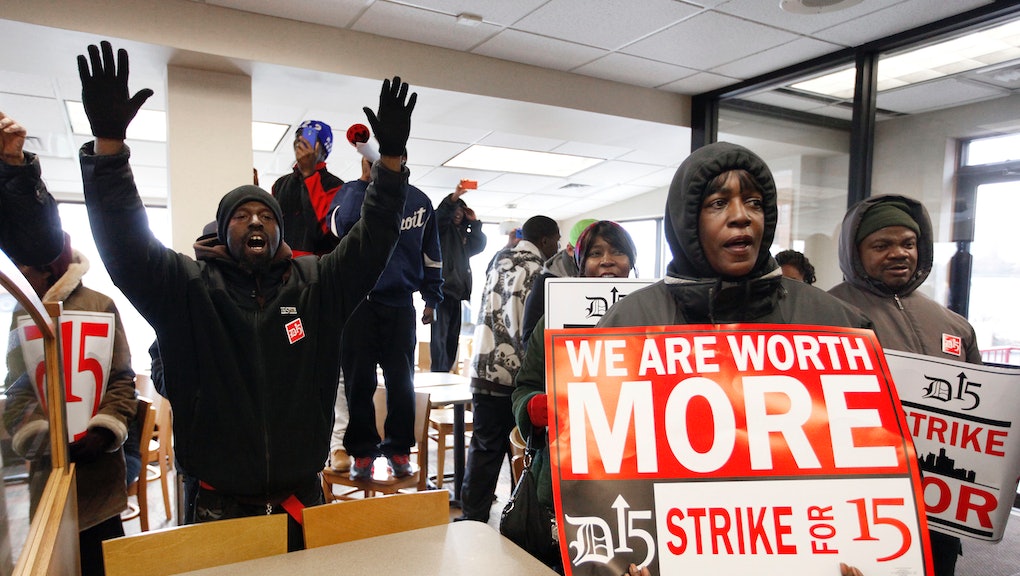 America Benefits From a Higher Minimum Wage — Here's the Proof

The minimum wage debate was a hotly contested political topic last year and will continue to be so in 2014. This year, low-wage employee strikes and President Obama’s recent proposal to raise minimum wage to $10.10, has put poverty, workers’ rights and income inequality at the forefront our national consciousness — and for good reason.

According to a new economic study released on Jan. 14 and backed by 75 economists including several Nobel Laureates, raising the minimum wage to $10.10 will have net benefits for the economy. Take a look at them in this chart here:

Some people argue raising the minimum wage will only help a few million teenagers, but this is not true. One in four Americans in the private sector makes less than the $10.10 an hour proposed by President Obama. An increased minimum wage would benefit breadwinners, including more than 70% of government contract employees and 17 million total workers by 2016 according to the economic study.

Besides, American workers are well overdue a pay raise anyways.

American productivity has dramatically increased since 1980, but real wages have either stagnated or declined. Minimum wage should have reached $21.72 in 2012 if it kept up with increased worker productivity, but instead is at the current, dismal rate of $7.25. To put this in perspective, you need to make $10.20 per hour to survive in the cheapest county in the United States, and the hourly wage a household must earn in order to afford decent housing is well above the minimum wage in most states.

But what happened to that $14.47 Americans generated in wealth?!

That $14.47 went to executives and continues to do so thanks to money in politics and regressive tax laws. Between 2009 and 2002 alone 95% of all income gains went to the top 1% as more Americans live in poverty than any other time in history — 46.5 million of them. This of course, affects taxpayers who end up subsidizing wages through social services. Americans work harder than ever, but the fruits of their labor are systematically redistributed from the bottom to the top and everyone who is not rich suffers.

It does not have to be this way, however. Many, many, many service-industry businesses demonstrate everyday that you can pay workers decent wages and still be profitable while turning out quality products. These businesses should not be the exception to the rule, as the private sectors prides itself on innovation and efficiency and would surely adapt to an incremental minimal wage increase as it has done for the past 80 years. As the chart shows, the results of their efforts would have positive, immediate and spillover effects that the economy needs.

Why then, exclude valuable workers from wealth they earned, which would boost the economy, and create demand that employers need to keep hiring? To borrow a phrase from Sen. Bernie Sanders (I-VT), "Does anyone think that makes no moral or economic sense?"

Raising the minimum wage to at least $10.10 is good economic policy.