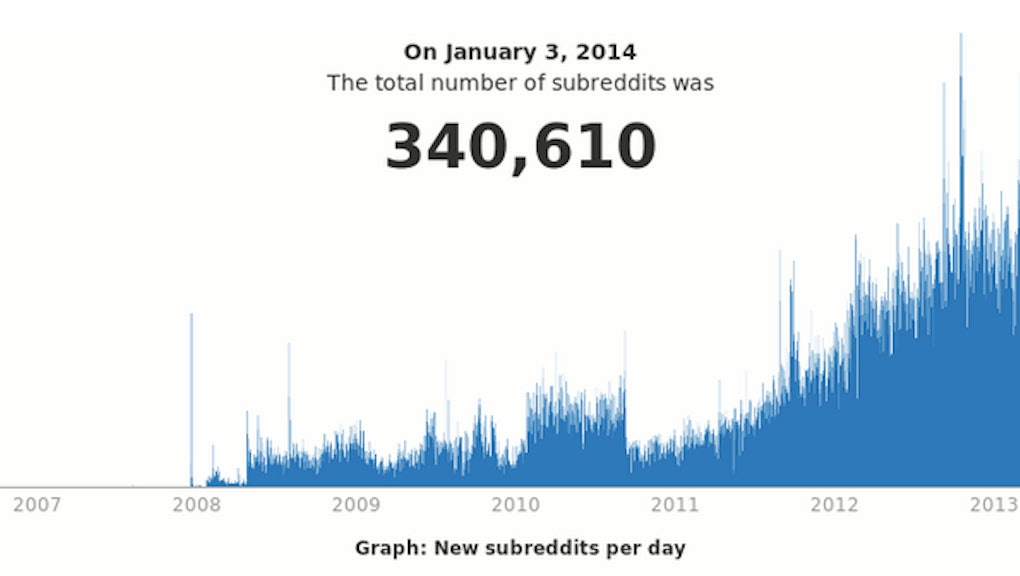 I bet you didn't know how big Reddit is.

Data from RedditMetrics shows just how much Reddit has exploded over the past eight years, and the growth is astonishing. 2012 was a good year. 2013 was an amazing year. 2014 stands poised to do even better. Here's what that expansion looks like:

That's right. Reddit now hosts over 340,000 online communities, each themed around a certain topic and interacting with the rest.

Many of these subreddits are inactive or limited in scope. Others are gigantic, reaching millions of viewers a day and impacting everything from crypto-currencies to the search for the Boston bombing suspects (albeit sometimes in a very bad way).

If you want to get really crazy, you can go gaze at the Reddit Interest Network, which maps out how all of these insane communities related with each other. The most interconnected subreddits cluster in the center, while fringe communities like r/DistritoFederal, bronies, and of course the expected porn-sharing subreddits lurk off to the sides (far, far off on the north of the map hides a community I won't even mention, and you shouldn't look up).

And Reddit's growth is well-deserved. Despite being the internet's biggest conglomeration of neckbeards and trolls (sorry, SomethingAwful and 4chan), it gives us fascinating content every day. For example, today I learned Bill Murray did Garfield by mistake after assuming it was written by one of the Coen brothers. (Whoops.)