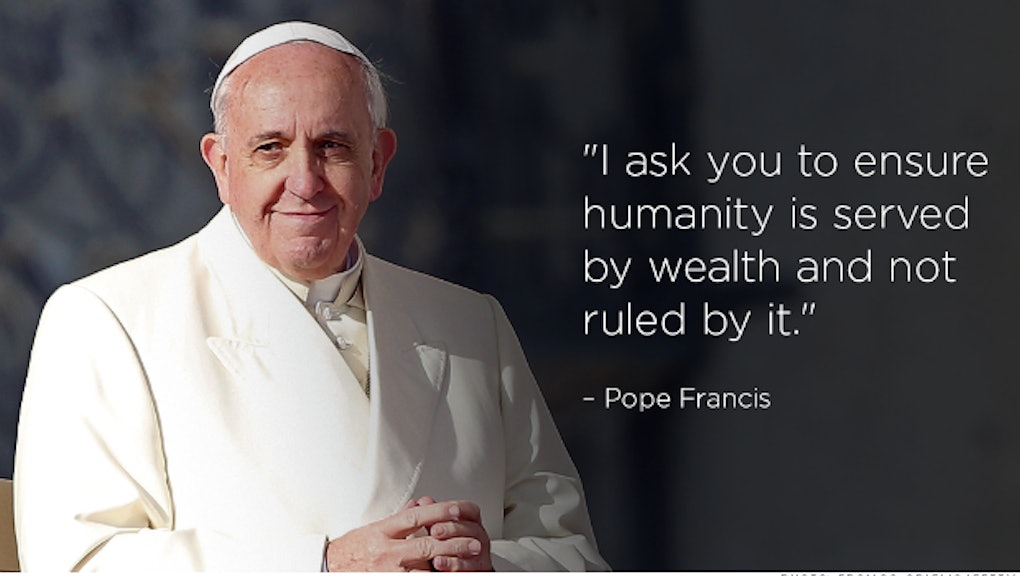 The Pope Sent a Letter to the World's Most Powerful People. This is What He Said In It.

The news: Pope Francis is at it again. After a string of weeks that saw Francis take on capitalism, the pope is now appealing to the world’s richest individuals directly.

In a letter to the attendees of the 2014 World Economic Forum in Davos, Switzerland, Francis called on the world’s richest to use their wealth to help the poor instead of simply padding their bank accounts.

"I ask you to ensure that humanity is served by wealth and not ruled by it," the letter read. Francis called for "decisions, mechanisms and processes directed to a better distribution of wealth, the creation of sources of employment and an integral promotion of the poor which goes beyond a simple welfare mentality."

If there’s one surefire way to cause a commotion at the WEF, it’s calling for a redistribution of wealth and a "promotion of the poor" in front of the richest people on Earth.

Of course, this is familiar territory for Francis. Just last month, the pope tackled income inequality — or, as he referred to it, one of the "grave financial and economic crises of our time." And before that, Francis released an apostolic exhortation, in which he criticized the current capitalist structure that "expresses a crude and naïve trust in the goodness of those wielding economic power" and lets the "powerful feed upon the powerless."

And now, Francis is taking his message and waving it right in front of the faces of the people "wielding economic power."

The guest list at the WEF in Davos features some of the richest and most powerful people in the world, including the CEOs of JP Morgan Chase and Goldman Sachs, and Walmart’s CEO of global eCommerce. All told, there are over 700 "chief executives" attending, 13 members of the United States Congress, and representatives of 20 central banks from around the world. It’s the world’s global elite all in one place.

Which is why Francis is taking advantage of the opportunity. He’s the pope, after all, and isn’t intimidated by the excessive wealth and power gathered in Switzerland this week. If he has a captive audience, he’s going to take advantage of it.

He’s right, too. The world is seeing extraordinary levels of inequality: the world’s richest 85 people have as much wealth as the poorest 3.5 billion, according to a new Oxfam report. That’s staggering. So if Francis wants to speak directly to the richest people in the world and call for a "better distribution of wealth" and a "promotion of the poor," I say we let him.