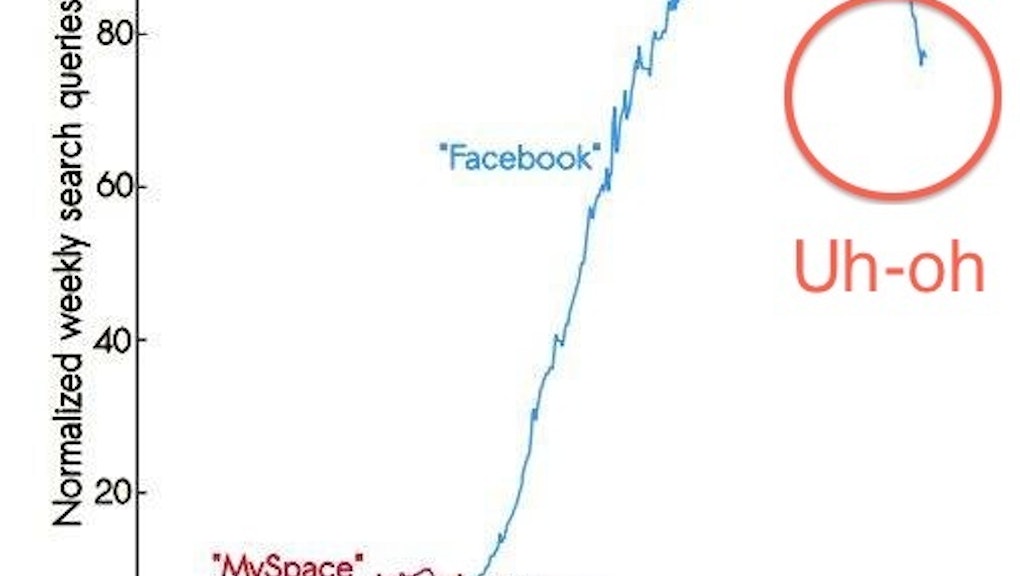 The news: A mathematical model developed by Princeton researchers John Cannarella and Joshua A. Spechler predicts that Facebook is doomed and will lose 80% of its peak user base between 2015 and 2017.

Disease models were adapted to study the "mass adoption and subsequent flight" from social network, drawing comparisons to the death of MySpace years prior. This graph comparing weekly search queries for the two services might just be a knife in the back for any Facebook exec:

"Ideas, like diseases, have been shown to spread infectiously between people before eventually dying out, and have been successfully described with epidemiological models ... Idea manifesters ultimately lose interest with the idea and no longer manifest the idea, which can be thought of as the gain of 'immunity' to the idea," they write in the study.

One problem is Facebook's growing older userbase. Sorry, old people — you're not hip.

A report released in January compared Facebook's demographics from 2011 to 2013, concluding that teen users have declined by approximately 25% while users 55 and older had grown by an astonishing 88%.

Compare that to Snapchat:

Coveted young users are flocking to more exclusive, newer services like Instagram and Snapchat, which boast a far younger, hipper userbase. Instagram, for example, has 150 million active users sharing 55 million photos a day and is growing at a "white-hot" pace, which is good news for Facebook corporate but bad news for their flagship site's membership:

Instagram's success in prolonging Facebook's lifespan might explain why they offered Snapchat $3 billion. That offer might have been Facebook's midlife crisis.

What's next? Founder and CEO Mark Zuckerberg is trying to move the News Feed towards quality journalistic content, making Facebook "the best personalized newspaper in the world" for each user. Teenagers might be excused for yawning: AllThingsD suggests that while senior Facebook management is trying to discourage the propagation of BuzzFeed-clone sites like ViralNova because they "don't want Facebook to become BuzzFeed," that content is what users want.

Will Facebook die? The study hasn't been peer-reviewed, and it's easy to make correlations without necessarily having any true predictive power. But if you believe the study's methodology, Facebook might not be able to avoid its oncoming demise no matter what it does. Every social media site, according to them, has a shelf date — and Facebook is quickly approaching its own.