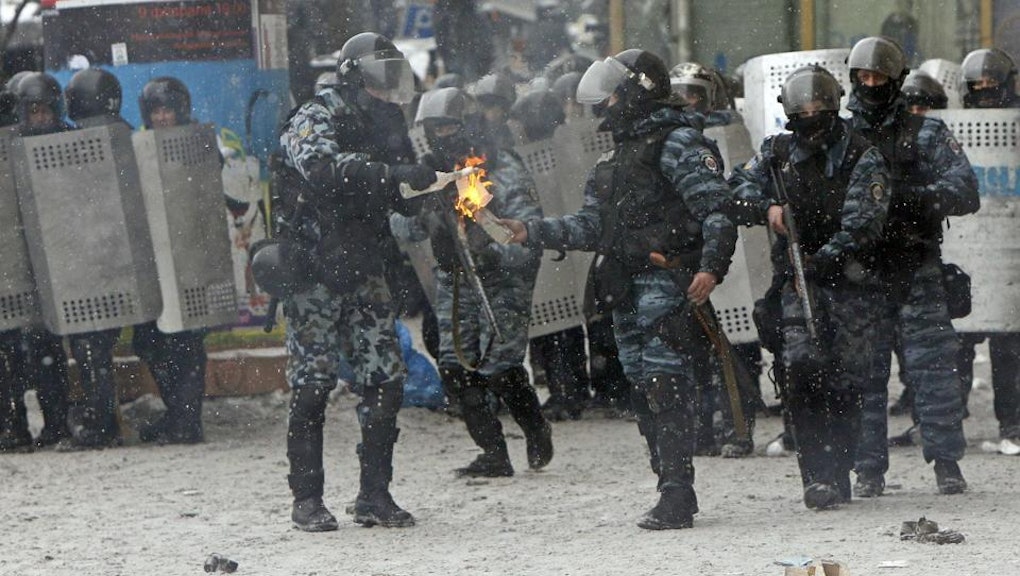 What is going on here? Normally in a huge protest — even the really violent ones — it's the discontented, the rabble, the oppressed, or maybe just some undercover cops throwing the Molotov cocktails.

But in Ukraine, the security services are plain fed-up with things like "rights" or "public safety" — and are throwing petrol bombs right back at the protesters.

This photo is going viral on social media right now, because it's a sign of just how much the Ukrainian protests in the capital city of Kiev have deteriorated into heavy-handed attempts at lock-down under the orders of President Viktor Yanukovych. The 100,000 protesters insist that new laws enacted under his regime, including a law designed to suppress protests, are designed to transform their developing democracy into the dictatorial mold of Vladimir Putin's Russia.

According to PolicyMic's Nina Ippolito, the new laws, passed on Thursday by the government of President Viktor Yanukovych, prohibit protesters from wearing helmets or face masks for protection, slandering public officials, erecting tents, and participating in mass disorder or protests that involve more than five vehicles. The penalties established range from fines, to police detention, to hard labor sentences.

These aren't strictly peaceful protests, but crackdowns by the government have left little options for protesters who have more-or-less been told their voices will not be heard by Yanukovych's government. Before the passage of the new laws, the protests had actually been simmering down; in their incompetence, the authorities essentially just provoked a riot, adding fuel to a dying fire.

Other news agencies have confirmed that the authorities are taking to detestable tactics to restore their vision of "order," including throwing Molotov cocktails at the protesters: