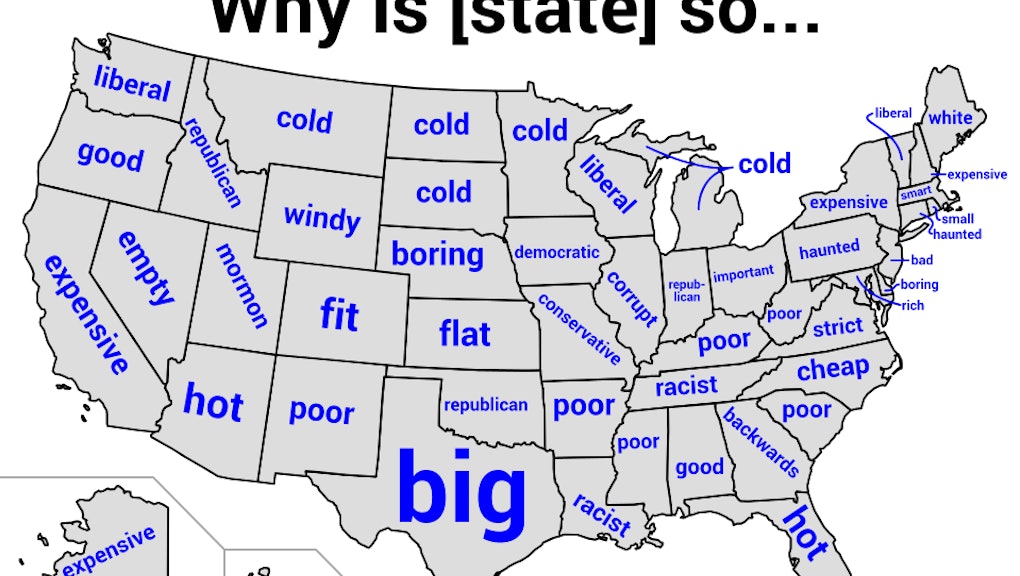 Cold, Racist or Mormon? What People Really Want to Know When They Google Your State

Google's autocomplete is a fascinating, never-ending source of questionable information and a look into America's collective curiosity (and, frankly, neuroses). That's why this map, which catalogues the top autocomplete result for each of the 50 variations of "Why is [state] so ..."

The results are hardly scientific, but take a gander below at the 18 states which each got their own result:

The South fared pretty poorly here, with "poor," "cheap," "racist" and "backwards" all dominating the public's fevered imagination and collective Ds in middle-school history. Another survey of Twitter tracked posts by geographic origin, finding pretty good evidence that the South (but also the Midwest) is still a locus of racism and xenophobia:

This graph from the Wall Street Journal and Phoenix Marketing International might go a long way towards explaining why California and New York are so damn expensive:

Montana, North and South Dakota, and Minnesota all had "Why is [state] so cold?" as their top inquiry. It's called latitude (and elevation).

Other results are a little more esoteric. How is Alaska, the state that literally gives you money just to live there, "expensive?" (It's the shipping.) And how on earth are Pennsylvania and Connecticut "haunted?" Amityville is in New York.

Meanwhile, in the public's unspoken mind, Utah is Mormon, Kansas is flat, Michigan is corrupt, Colorado is fit, Nebraska is boring and Maine is white (this one is true).

Just another reminder: Google is not scientific.

For more fun, check out this map of other stereotypes of cities compiled via autocomplete, including "Washington is Hollywood for ugly people," and "New York is killing me" and "New Orleans is below sea level." Wait, that last one isn't a stereotype, it's a confirmed liability. Oops.