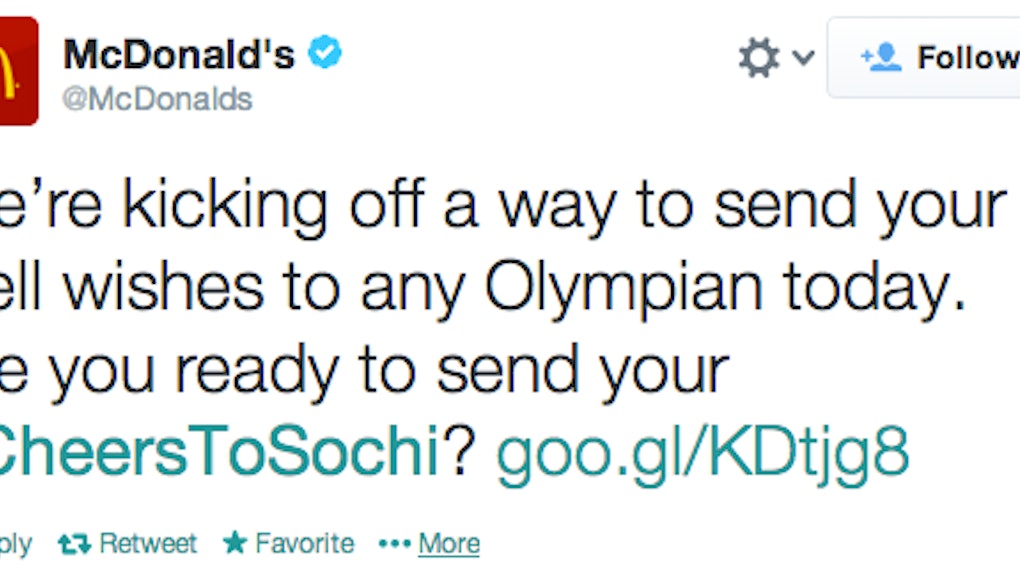 #CheersToSochi is Going Viral. But Here's Why People Are So Pissed Off.

The news: On Jan. 21, McDonald's launched a new social media campaign on Twitter with the hashtag #CheersToSochi — intended to be used to send positive messages to American athletes traveling to Russia for the Winter Olympics. The hashtag did indeed takeoff, but not exactly in the way McDonald's wanted.

Instead of using it to address athletes on the U.S. Olympic team, Twitter users aimed #CheersToSochi at the fast food chain in protest of its corporate sponsorship of an Olympics that many see as anti-LGBT because of Russia's discriminatory laws. Members and supporters of the LGBT community don't exactly want to send "cheers" to Russia when its president has compared homosexuals to pedophiles and people are being tackled to the ground for waving a rainbow flag.

It didn't take long for #CheersToSochi to be completely taken over. As Scott Wooledge writes for the Huffington Post, "Legions of LGBT protesters outnumbered everyone else in the [Twitter] feed."

And it didn't help matters that McDonald's didn't respond to the Twitter protests until three days later, and even then it was tepid.

Again Wooledge gets it right here: "The silence that paralyzes big Olympic sponsors from speaking out on behalf of LGBT Russians seems to extend the marketing of this debacle."

Sochi's corporate sponsors seem content to do and say nothing rather than address the human rights issues surrounding the Olympics, and that willful ignorance only exacerbates the problem. Just because brands want to ignore Russia's anti-LGBT culture doesn't mean it isn't there.

It's up to brands to defend their sponsorship of the Olympics in Russia despite the rampant homophobia present there. McDonald's chose to ignore the issue. Sure, U.S. athletes could use our support, but while we're sending cheers to them, how about we send some jeers to the bigots in Russia promoting discrimination and violence against the LGBT community?