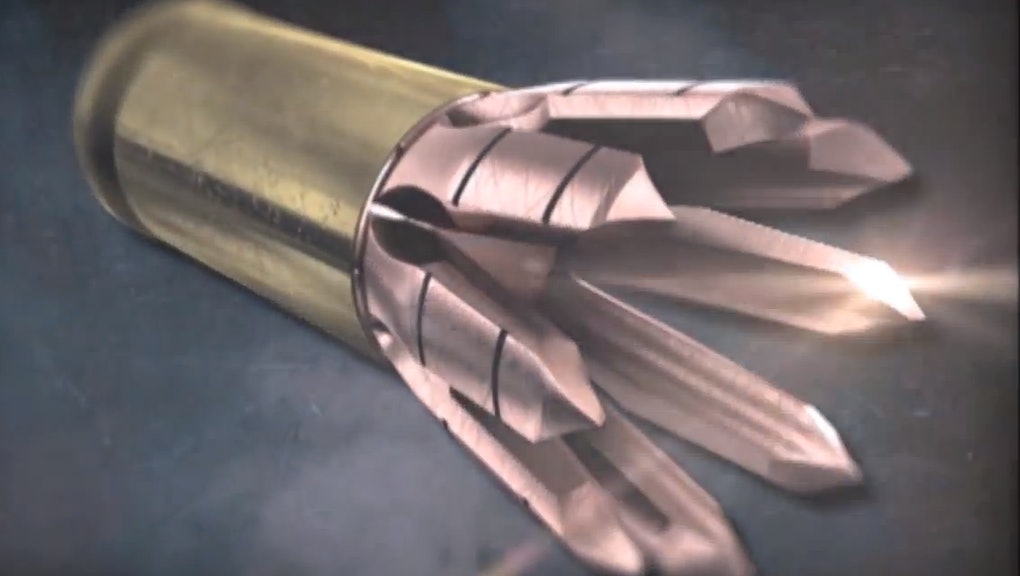 A New Bullet Has Been Invented. This is What it Looks Like.

The news: Not satisfied with the destructive power of hollow-point bullets or large-caliber guns? G2 Research has you covered with the new "Radically Invasive Projectile" (R.I.P., clever) an exploding bullet they say can "take the civilian and law enforcement markets by storm, and truly become the last round you’ll ever need."

The bullet is manufactured with bullet points containing trocar angles (edges with three angles reaching one point) to penetrate flesh more easily. It acts like a full metal jacket bullet when penetrating solid objects like "sheet rock, plywood, sheet metal or glass and still performs its original intent. The bullet shreds through solid objects and only then, expands its energy," reserving the worst for when it hits the target.

The result? Gun owners say that the expanding bullets prevent over-penetration (shooting through a target, or, say, the walls of your house) and make sure the bullets don't ricochet. But the new R.I.P. rounds are also sure to cause horrific wounds in their target.

Here's their 9mm variant in action:

Why you should care: According to G2 Research President Cliff Brown, exploding ammunition is super-duper necessary to defend your home against intruders.

“We went around and talked to several vendors and it knocked their socks off,” Brown told The Blaze. “I’ve been in the ammunition business for many years and I wanted to create a round that would work well against a home intruder — there were so many stories out there about a woman trying to defend her home and having to shoot someone five or six times and they’d still come after her, we wanted to create an effective one-shot manstopper.”

The round splits into 9 needles of solid copper on impact, as seen below:

But according to Americans Against the Tea Party's Richard Rowe, himself a weapons enthuisiast, the new bullet bears an unmistakeable resemblance to a tool of war banned by the Hague Convention (Hague IV 1907, Article 23E): Flechette rounds.

In a 1964 St. Petersburg Times article about the use of flechettes in Vietnam, a U.S. Army officer says of the medical task of treating flechette victims:

"Don't kid yourself. It is not a job for a surgeon but for graves registration."

Think a shotgun, but nastier. Traditional bullets do most of their damage by transferring kinetic energy in an expanding "bubble" around the projectile. Flechette rounds are different. They're full of nasty, tiny spikes which pierce the insides of the target (creating holes through skin, muscle, lungs, heart, vital organs, etc.) and pass through the other side.

Rowe notes: "The flechette-like needles that the R.I.P. round produces won’t even offer its victims that cold mercy, though. Because they’re copper."

Instead of piercing the target, R.I.P.'s copper needles will more likely come to a rest inside the target - as seen in their own video. And because the 9mm round possesses less stopping power, that means that the R.I.P. is a poor home defense weapon but an excellent way to inflict maximum pain and suffering on the target.

Or as Rowe, who in the past attempted to modify his own ammunition to achieve a similar effect, calls it: "96 grains of pure, unadulterated hate. A desire to inflict suffering. Period."

That said, police and civilians already have access to hollowpoint rounds which are very, very dangerous and painful, so it's not like the R.I.P. round is a game changer. But BearingArms.com says that R.I.P. and other similar rounds likely "will cause substantial blood loss, but less reliable penetration to vital organs" compared to hollowpoints, and assesses it as having a niche role in self-defense.

And according to a study done by Greg Ellifritz for the Buckeye Firearms Association, it takes an average of two shots regardless of caliber to drop an assailant (9mm does in fact fare rather poorly here):

In fact, the only way to reliably drop someone in close to one shot is to use a shotgun or a rifle. So arguably, there's no reason to buy a fancy flesh-shredding round at all other than the novelty factor.

Or if you wanted to cause maximum pain and suffering.

The bottom line: The new bullet is sure to have gun owners drooling, but with potentially limited application in home defense and nastier wounds, R.I.P. is a dubious purchase.