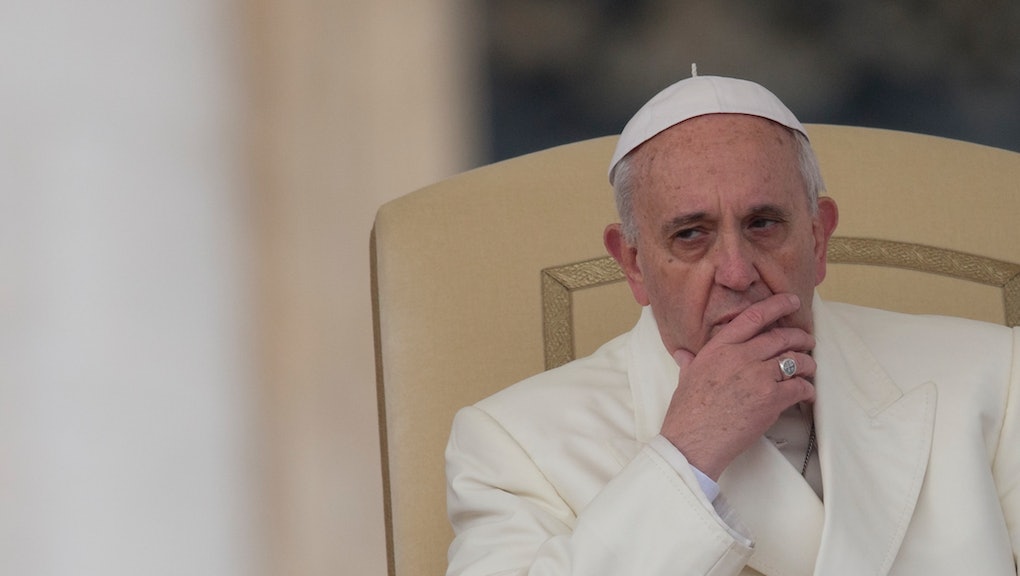 For His Next Feat, the Pope Will Champion the Environment

The pope's next push: On Friday, Vatican spokesman Father Federico Lombardi confirmed that Pope Francis’ next project is likely to be an encyclical about ecology and the environment, a topic that was dear to Francis’ predecessor, Pope Benedict XVI. If and when it’s produced, Francis’ encyclical would join his previous statements regarding income inequality, poverty, and global peace.

The background: If Francis produces such a document, he would hardly be the first pope to take up the issue of ecological stewardship. In 1971, reformer Pope Paul VI urged Christians to take responsibility for the environment, writing that, “Man is suddenly becoming aware that by an ill-considered exploitation of nature he risks destroying it and becoming in his turn the victim of this degradation.” In 1979, Pope John Paul II declared St. Francis of Assisi (the namesake of the current pontiff) to be the patron saint of ecology, and in 1990, John Paul began the year by calling for ecological awareness and a newfound respect for nature, noting that the ecological crises he identified were, ultimately, a moral issue affecting all of humanity.

More recently, Pope Benedict XVI, who is probably best remembered for his short term, ornate throne and resemblance to a certain fictional emperor, placed a strong focus on environmental stewardship and preservation — so much so that he was dubbed the green pope. Like John Paul before him, he linked the idea of the environment — “God’s gift to all people” — to that of poverty. However, he also called on world leaders to address climate change and rendered the Vatican carbon neutral. As such, Francis’ new emphasis on environmental issues could be seen as a nod to Benedict’s Earth-friendly legacy.

But ... Before everyone begins hugging trees, wearing hemp crucifixes, eating vegan empandas and lighting blunts in celebration, it’s worth remembering that as progressive as some of Pope Francis’ statements may sound, they aren’t necessarily reformist in nature. Francis’ ecological message is likely to mirror those of previous popes, which used environmentalism as a jumping off point to discuss humans’ moral duties toward one another, or in Benedict’s case, “how the nature of the person — masculine or feminine as created by God — must also be defended.”

In short, while it’s certainly positive that Francis is continuing his predecessors’ focus on environmental stewardship, he won’t be manning the ship’s wheel on Greenpeace’s Rainbow Warrior or handling more birds anytime soon.