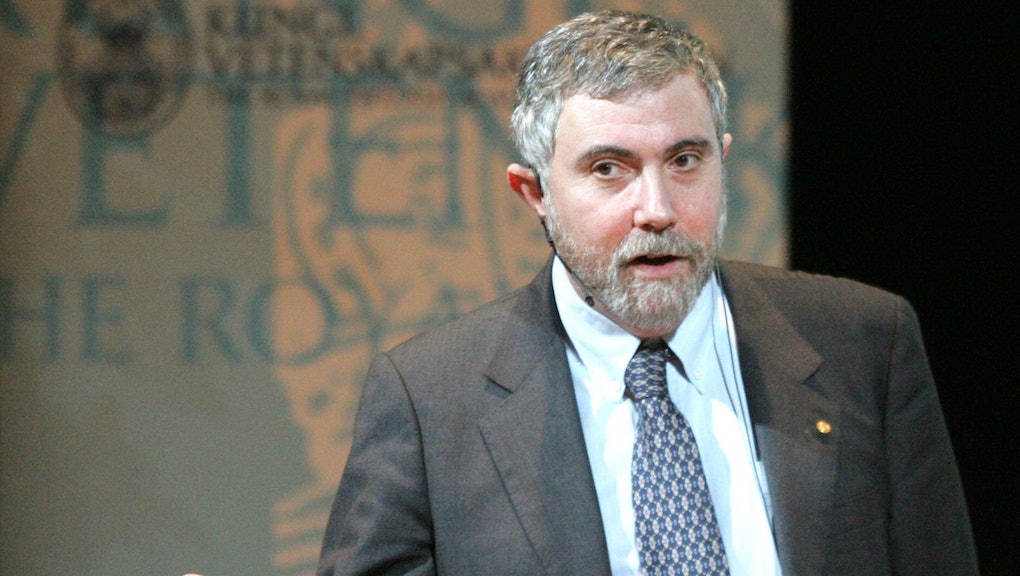 The rich are getting richer and the poor are, well, either getting poorer or staying pretty stagnant.

Rising inequality brings stagnant wages and rising debt, which "makes us more vulnerable to financial crisis," writes economist Paul Krugman in his latest op-ed in the New York Times. But, he adds, an extreme wealth gap also "creates a class of people who are alarmingly detached from reality."

We saw this in millionaire investor Kevin O'Leary's ridiculous comment about global wealth disparity being "fantastic" news. We also witnessed this detachment in billionaire venture capitalist Tom Perkins' letter to the editor in the Wall Street Journal that compares the public's criticism of the wealthiest Americans to fascist Nazi Germany's persecution of Jews, and suggests that we're well on our way to another "Kristallnacht." (Perkins later said in a painful interview on Bloomberg that his use of the word was "a terrible misjudgment," but that he doesn't regret his original message.)

Shockingly, Perkins isn't the first uber-rich finance person to compare our taxation system to Nazi Germany. In 2010, Stephen Schwarzman, chairman and CEO of the Blackstone Group, said that eliminating tax loopholes for hedge fund managers is "like when Hitler invaded Poland in 1939."

While some financial titans manage to keep Hitler out of their comparisons, Krugman argues that they still express their economic views with "paranoia and megalomania."

Yes, the 1% may not be faring as well under President Obama's current fiscal policies, but every group ends up on the losing side "somewhere along the way," writes the economist, because "that's democracy."

However, the difference between "normal" people and these uber-rich one-percenters is that "normal people take it in stride ... [they don't] compare their critics to Nazis and insist that the world revolves around their hurt feelings." And that's what makes the rich "different from you and me," claims Krugman.

So how did our rich Americans lose touch with reality?

Krugman has an answer for that too:

"[The rich] can and all too often do surround themselves with courtiers who tell them what they want to hear and never, ever, tell them they're being foolish. They're accustomed to being treated with deference, not just by the people they hire but by politicians who want their campaign contributions. And so they are shocked to discover that money can't buy everything, can't insulate them from all adversity."