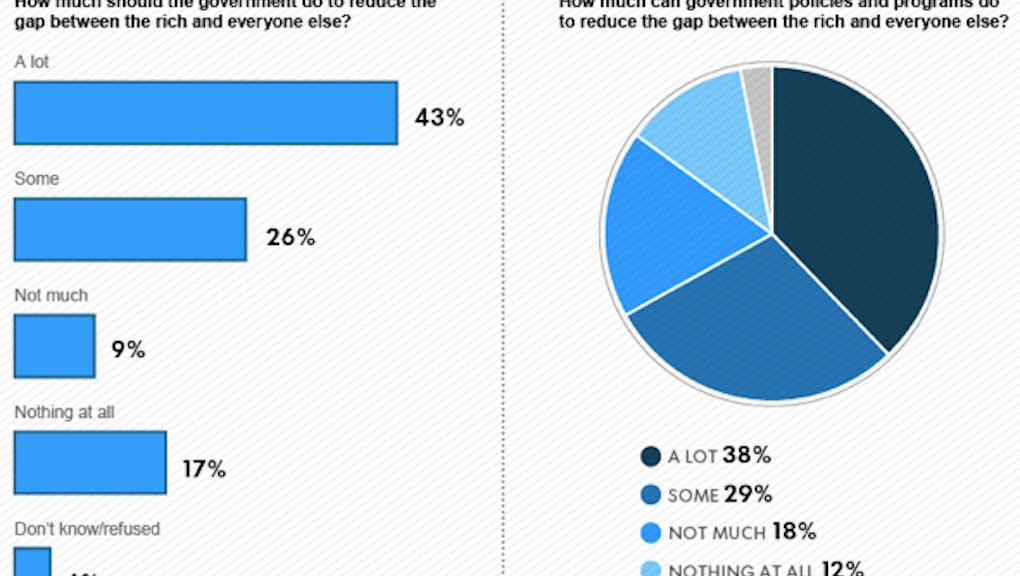 Do Americans Actually Care About Income Inequality? Hell Yeah They Do.

We're fed up, we're not going to take it anymore, and we expect the government to do something about it.

While Republicans think that the best way to help the poor is cutting taxes on the wealthy and corporations to encourage investment and getting them off of aid which "does more harm than good" at 59% and 65% respectively, the public disagrees.

Perhaps they're seeing that corporate profits are doing just fine in the down economy.

Just 35% of Americans think we should lower taxes on the wealthy and corporations, while 54% think they should be raised to expand programs for the poor. And 49% of all Americans think government aid to the poor does more good than harm.

Republicans also find themselves in the minority on the minimum wage. Democrats are planning to push a bill that will raise the minimum wage to $10.10, and 73% of the population (including 53% of Republicans) agree with them:

Just 25% of Americans, mainly Republicans, oppose a minimum wage of $10.10 - and only 3% of the population is undecided.

The polls indicate that Americans also support extending benefits for the long-term unemployed by a nearly 2-1 margin, with 63% in favor.

So the next time someone tells you that income inequality "doesn't matter," you can point to the vast majority of Americans on your side and say "It might not matter to you, but it sure as hell matters to us."

Follow PolicyMic's live coverage of the 2014 State of the Union here.