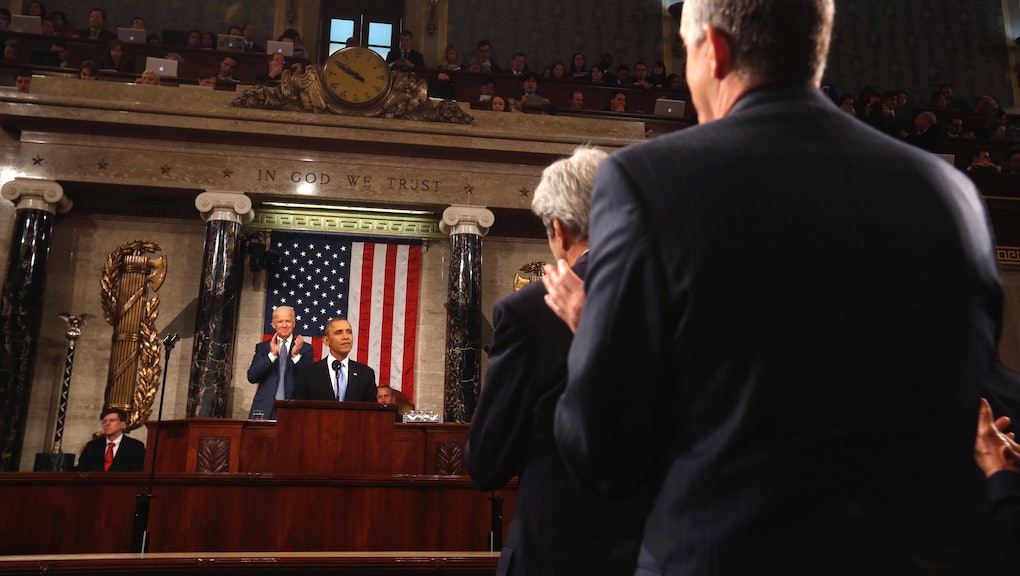 At the State of the Union address on Tuesday night, President Obama did an awful lot of talking about the economy, the gender pay gap, foreign policy, and especially the gridlock in Congress preventing serious action on any of those fronts.

But the president was conspicuously silent on two major issues that have blown up over the past year: Marijuana legalization in Colorado and Washington state, as well as gay rights.

The president steered notably clear of culture-war flashpoints, with no mention of the Employment Non-Discrimination Act (ENDA) designed to protect LGBTQ workers from being harassed or discriminated against on the basis of their sexual orientation or gender identity. Though the act passed through the Senate, it's widely considered a non-starter in the GOP-controlled House of Representatives.

The president could have included LGBTQ rights in his swing about using "executive actions" to push through changes that can't clear a Congress controlled by the opposition. He could've declared a policy of non-discrimination in federal employment practices. But he didn't do that.

“The president’s message tonight failed to address the needs of LGBT workers looking for a fair shake in this economy," declared Human Rights Campaign President Chad Griffin. "Not only was there no call for the House to pass a federal law to protect LGBT workers nationwide, President Obama also sidestepped his commitment to take action where Congress has left off, leaving out an order prohibiting discrimination by federal contractors."

Instead the gay community got barely a nod:

"... across the country, we're partnering with mayors, governors and state legislatures on issues from homelessness to marriage equality."

Meanwhile, despite the president's recent candid remarks on marijuana (namely, admitting that it's less dangerous than alcohol), recreational marijuana legalization in two states and a major U.S. city (Portland, Maine) was completely ignored. Not one mention.

Reason's Nick Gillespie recently denounced the president's "unfathomable, bottomless, contemptile cowardice on pot," pointing out that 87% of Americans think that marijuana is basically similar to alcohol and asking:

"What does it say about our elected representatives when even a president who grants that marijuana is no 'more dangerous than alcohol,' jokes about his past drug use and faces no more elections in his lifetime is terrified to go along with a massive and still growing majority of Americans?"

I'd argue that the omission of both issues speaks to an administration skeptical about ceding any political ground to the opposition, even when the political risks aren't very high. It's also possible that Obama doesn't feel like either issue is a particular priority to him, especially marijuana, where his position isn't much different than Mitt Romney's insistence that weed isn't "an issue of significance." (Tell that to the millions of Americans locked in prisons for doing what David Brooks did in college.)

All in all, liberals will probably agree with the president's words on economic justice and equal pay for women. But if you were expecting the president to take the lead on progressive social issues, it did a pretty mediocre job of that.

At least they can take solace in the fact that Mitt Romney would have been actively hostile to progressive social reforms rather than merely tepid. Take Huffpo Politics' theoretical Romney 2014 State of the Union as an example:

"Our legal system, nevertheless, remains strong. I am pleased to announce that we have made 25,000 arrests in Colorado in an effort to rid the state of the scourge of marijuana."

Exaggerated, maybe. But also maybe not that far off.