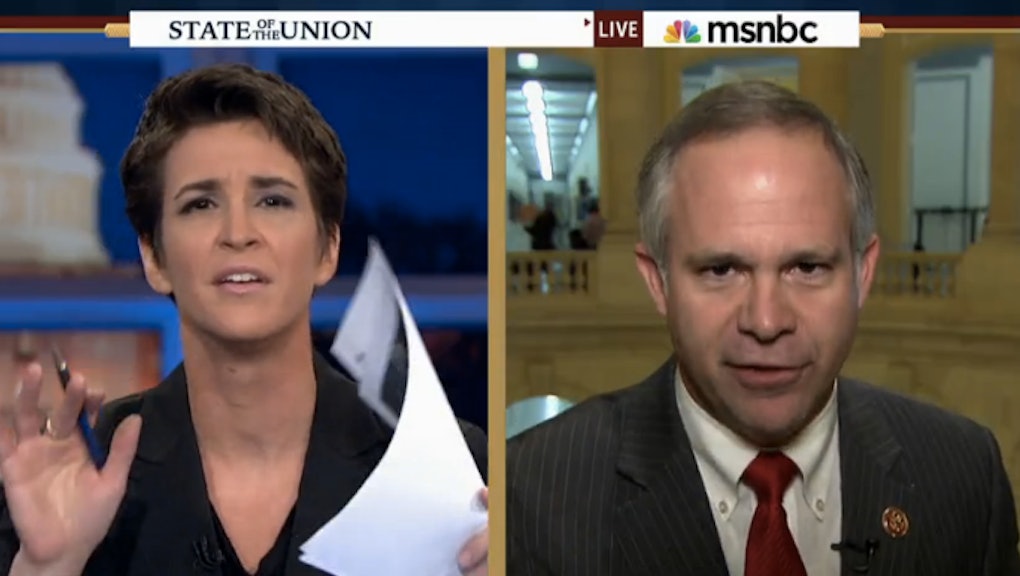 All in all, the State of the Union was pretty great if you're a woman. President Obama told Americans to lean in and pay their female workers a fair wage, and the most tweeted moment of the entire address was a pretty solid Mad Men joke.

As soon as Republicans took the mic, however, things took a very different turn.

During news coverage immediately following President Obama's address, MSNBC host Rachel Maddow invited Rep. Tim Huelskamp (R-KS) to discuss his reactions to the President's speech, but it quickly descended into an actual Mad Men episode (not the one the President laughs about, the kind that the GOP still lives in).

After Huelskamp went on a rant about Hillary Clinton and Benghazi, Maddow asked him if he had supported funding for the bills that would fund diplomatic spaces such as the Benghazi consulate. Spoiler alert: he hadn't. So Huelskamp decided to veer in personal attacks.

"“We need answers about a lot of things. This administration promised to be the most transparent in history, Rachel, and if you would stop being a cheerleader and not a journalist, maybe we would get the answers," Congressman Huelskamp said.

"Did you just call me a cheerleader?" Maddow retorted. Yeah he did.

Maddow ended the segment flawlessly, by telling Huelskamp that she had always enjoyed him "on television with other people" but found him "spectacularly disenguneous in explaining his words tonight." She also took the whole thing in good humor when, in a later segment, she sarcastically said: "It's just because of the way that I look that people call me a cheerleader."

Proving once again what TheLi.st co-founder Rachel Sklar has always said: "Rachel Maddow is the Beyoncé of cable TV."