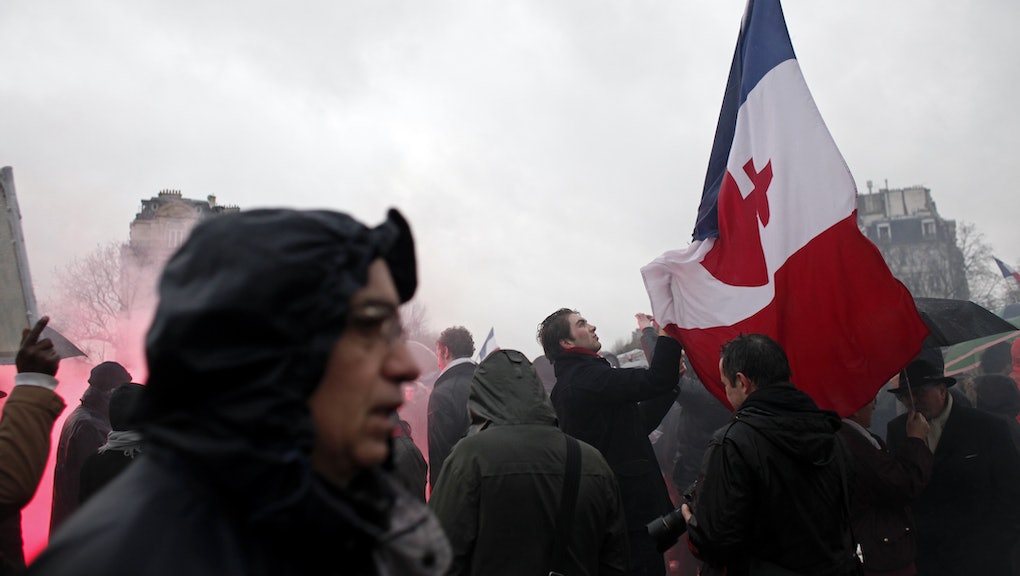 Watch: Anti-Government Protesters in France Turn Their Rage Toward Jews

The marchers moved through the streets of Paris chanting things such as "Juif casse-toi, la France n'est pas a toi" ("Jews you flaws, France is not yours"), "Juif! Juif! Juif! Juif!" ("Jews! Jews! Jews! Jews!"), "Juif, Licra: on n'en veut pas" ("Jews, Licra: We don't want you"), "Juif, hors de France" ("Jews, out of France") and "Faurisson a raison! Chambres á gaz c'est du bidon" ("Faurisson's right! Gas chambers are bullshit"), all while many made Nazi salutes or quenelles with their arms.

The disturbing footage was captured out of a window overlooking the city streets and alongside the protesters themselves, making it seem like the event was almost mundane or not out of the ordinary. It's shocking that these events seem so commonplace in such a major European city.

In an attempt to dispute the chant's prejudice, some have tried to claim that the protesters were shouting "CRIF" not "Juif," but complaining about the Representative Council of the French Jewish Institutions is hardly any better.

France has a serious anti-Semitism problem. Although immigration to Israel from France has dropped over the last 10 years, Washington Post reports that "France is the only country seeing a growing number of its Jewish citizens move there [to Israel]." While 19,200 Jews worldwide made aliyah (the Hebrew term for immigrating to Israel) in 2013, a slight rise from 18,940 in 2012, the Times of Israel reported that according to the Jewish Agency for Israel, "France saw 3,120 Jews leave for Israel, marking a huge 63% increase over the 1,916 who came in 2012."