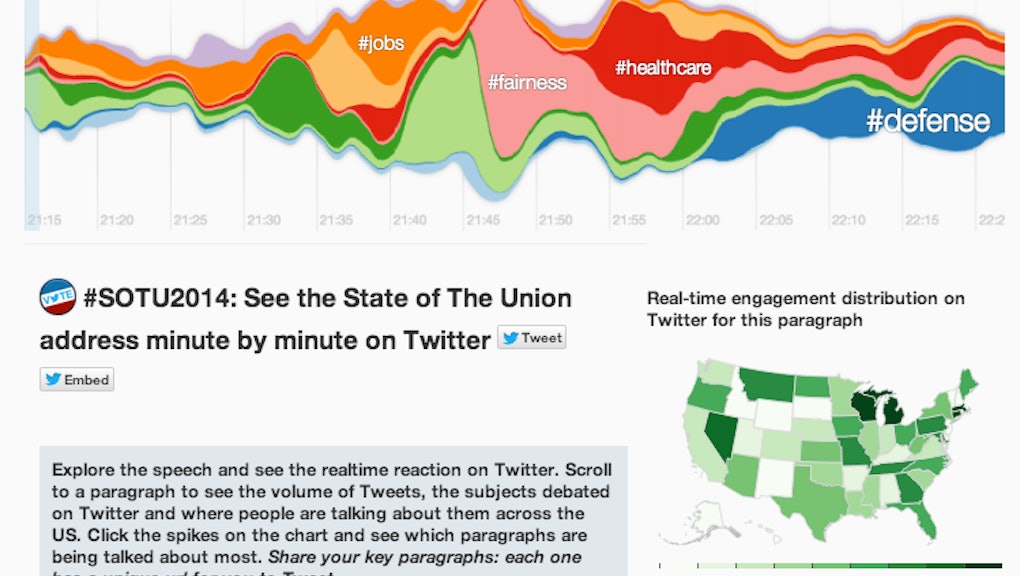 This is pretty cool. Thanks to Twitter and their Government team (@gov), you can now see which moments of Tuesday night's State of the Union resonated with the Twitter crowd and which didn't:

Take these metrics with a grain of salt, as the State of the Union has long been considered politically irrelevant, at least as far as its ability to actually influence the direction of the country or the views of its audience. As Chris Cillizza writes, the flurry of #SOTU coverage is "inversely proportional to a) the speech's ability to sway public opinion and b) the speech's chances of becoming a major moment," regardless of presidency. (Notable exceptions include George W. Bush's "axis of evil" and FDR's "four freedoms" speeches.)

But you can take some useful observations of what matters to the media and Twitterati from Twitter's data. Jobs, healthcare, and especially fairness lit up the night, coinciding with key phrases from the speech and rounds of applause.

Twitter loved Obama's mention of Misty DeMars, a woman suffering from the cut-off of her extended unemployment benefits. And it absolutely exploded when the president mentioned the gender pay gap between men and women and compared workplace policies to the sexist attitudes of the characters from Mad Men:

That moment inspired some of the biggest Twitter flashpoints of the night.

And the always-classy Eric Erickson:

Twitter also loved it when Obama called out the GOP for attempting to repeal the Affordable Care Act 40-plus times ("The first forty were plenty. We got it."). And there was another major spike when the president gave a hero's welcome to attendee Sergeant First Class Cory Remsburg, an Army Ranger who was permanently disabled by a bomb blast in Afghanistan.

There are regional implications as well. The emphasis on fairness played well on the eastern half of the country, while health care and defense lit up the Midwest and Southwest. And jobs, for some reason, really lit up the South.