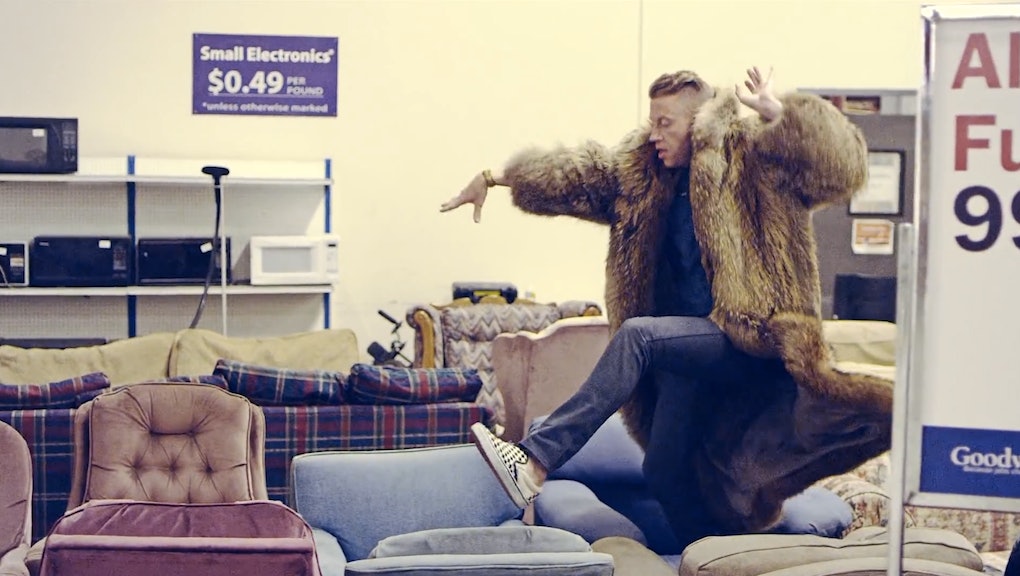 "Thrift Shop" and "Royals" Are About the Exact Same Thing

On Sunday night, the Recording Academy told us what we already knew: "Royals" and "Thrift Shop" were the songs of the year. What they didn't tell us, though, is that records have much more in common than their status as mega-hits.

From late 2007 through 2009, the U.S. was in the throws of a recession that put millions of Americans out of jobs. But you'd have no idea from looking at the top of the Billboard charts at the time. Carefree dance anthems and love songs ruled the radio, painting the picture that the good old U.S. of A was as glamorous and wealthy as ever. Lines like "I got my money, let's spend it up" or "Pedicure on our toes, toes" kept promising us that we could have whatever we liked when we knew we couldn't.

But Macklemore and Ryan Lewis's "Thrift Shop" and Lorde's "Royals" know exactly how unrealistic those songs were. They also knew that there was something as stylish as any Gucci item to be found in a thrift shop. They voiced what we all felt without resorting to the 600 word think-piece — that the excess in pop music was hilarious and ridiculous. And we made them stars for it.

Other recent pieces of mainstream culture have captured this shift away from excessive consumerism — films like The Wolf of Wall Street and TV shows like 2 Broke Girls come to mind — but nothing has done it as directly as these two ubiquitous songs, which pervaded every dorm room in America almost as soon as they came out. The songs reflect the new, better habits we've adopted (or at least are trying to adopt) and our increasing alienation from that culture of excess. They build off of a changed spirit — one that mocks materialism and celebrates thrift and humility ("I am stunting and flossing and / Saving my money and I'm hella happy, that's a bargain, bitch); that knows that when we brag about designer brands, we're basically just trying to let the world know, "What up? I got a big cock."

The songs are also an attack on the previous generation of hitmakers, who celebrated excess and waste. But while the lyrical content is quite different, the musical formula is largely the same, allowing Lorde and Macklemore to slyly and mockingly reach the same audiences as the biggest hits of the past few years. "I've never seen a diamond in the flesh," Lorde sings, as a wash of rich, layered harmony breaks over the track. "But shit, it was 99 cents!" Macklemore raps with the enthusiasm and bravado of Lil Wayne singing, "I'm a Young Money millionaire," as a fat saxophone sizzles over a deep piano-driven beat. These moments signal a tidal shift for a new generation of aspiring hitmakers growing up with less job opportunity — just because the sound is indulgent doesn't mean that the lyrics have to be.

Though the recession may be officially over, we still aren't free from the anxiety and insecurity it bred into our national psyche. Maybe these songs took so long to get here because we're only just accepting that this is our lot right now — people in the thick of a recession don't necessarily want to hear songs that confront the nation's cultural problems directly. From 2007 to 2009, all of the biggest hits — from "Whatever You Like" to "Love in this Club" to "Boom Boom Pow" to "Love Story" — not only carried on as usual, but celebrated living to the fullest and shallowest.

That's how two songs about the same thing defined 2013. Slowly but steadily, our culture is shifting. The hardships people have experienced as well as the lessons we've learned have had time to sink in. "Royals" and "Thrift Shop" may be just songs, but their success shows the American public coming to terms with their destructive consumerism, realizing that those of us "trying to get girls from a brand" can't anymore, and that American listeners, royals all, are ready to take charge again.