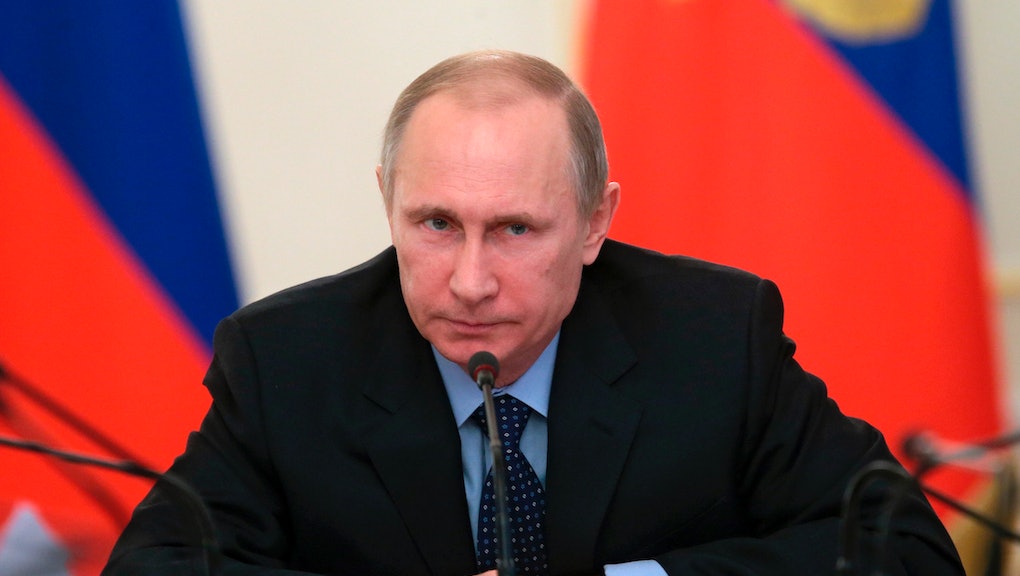 There's been a lot of very disturbing news coming out of Russia ahead of the 2014 Winter Olympics in Sochi — crackdowns on gay rights, Orwellian mass surveillance, a high probability of a terrorist attack on the games, and let's not forget, whistleblowers who are threatened that they will "drown in their own blood."

Russia's Ministry of Foreign Affairs has released a sprawling 153-page report accusing the nation's critics of hypocrisy and human rights violations, apparently all to point out that Europe isn't so great either. Foreign Policy details the accusations, which include xenophobia, the growth neo-Nazism, detention and abuses of immigrants, human trafficking, and even genital mutilation. Also among the criticisms in the report is that the EU is imposing an "alien view" of homosexuality.

According to Russia's report, "Attempts have been made to enforce on other countries an alien view of homosexuality and same-sex marriages as a norm of life and some kind of a natural social phenomenon that deserves support at the state level."

"Such an approach encounters resistance not only in the countries upholding traditional values, but also in those countries which have always taken a liberal attitude towards queers."

Okay, so maybe slurring gay people by calling them "queers" in your human rights report isn't the smartest, but Russia isn't particularly progressive.

The report singled out Denmark for particular scorn, saying "Danish and international human rights activists have repeatedly stated that there are major problems with respect for human rights, freedoms and democratic norms in 'perfect Denmark.'"

Denmark, for what it's worth, legalized gay marriage in 2012.

It criticized the nation's Danish People's Party, which "is always willing to whip up a xenophobic mood and whose leaders constantly criticize the government for failing to restrict immigration."

The report also noted 37 incidents of Danish anti-Semitism in 2012.

While human rights violations across Europe are indeed widespread and disturbing, Freedom House ranks the EU as one of the friendliest regions for human rights in the world. Russia? Not so much. According to the rankings, President Putin "devoted 2013 to strengthening his grip on power and eliminating any potential opposition."

Well, maybe not. But I doubt the dog and pony show is fooling anyone, either.