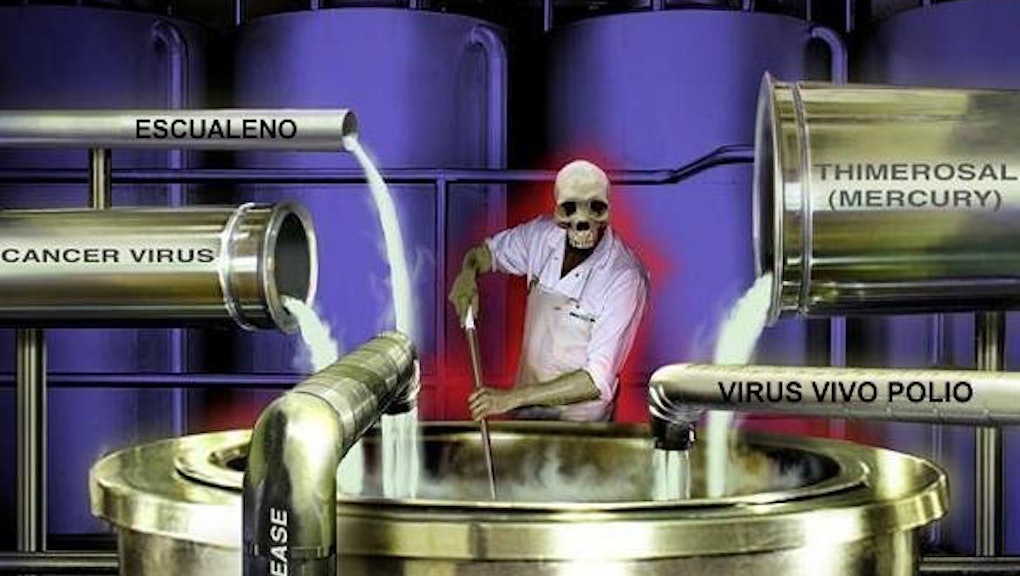 This Anti-Vaccine Image Is Going Viral. But There's a Surprising Story Behind It.

This image from American artist David Dees has been making the rounds on the internet recently, both from the anti-vaccine movement and critics who enjoy mocking them.

If you're not familiar, Dees' illustrations are a glorious mish-mash of conspiracy theories, far-right naturalist nonsense, and admonishments against the Illuminati and GMO food. They're labeled as satirical, but the mainstream audience — uninformed "sheeple" — is the target.

Taken at face value, his art makes NaturalNews.com's self-declared "Health Ranger" Mike Adams look like a Ph.D candidate. While Dees' online bio is notably austere, he's a cat lover, libertarian, worked on corporate and movie advertising, and believes that aliens from Planet X are coming to turn us into hybrids. Some more samples of his work, which ranges from fairly milquetoast commentary on banks and bailouts to flat-out racist depictions of Mexicans, below:

It's no coincidence that the anti-vaccine image originated with someone thoroughly invested in all other kinds of fringe theories. A study published last year in the Public Library of Science found an unmistakeable correlation between conspiracist ideation and a tendency to reject scientific evidence. The authors say that the anti-vaccine movement has a libertarian contingent (which rejects vaccines mainly out of a distrust of government) and a leftist contingent (which rejects vaccines because of an inherent distrust of pharmaceutical companies). Dees is a champion of the first contingent, but the second has its own very public defenders.

The anti-vaccine movement has done some very serious damage to public health, including a resurgence of whooping cough over the past decade. Unlike Dees, the adherents tend to be white, affluent mothers.

Says blogger and obstretrician/gynecologist Dr. Amy Tuteur: "Virtually every single empirical claim of vaccine rejectionism is factually false, but parents who lack even the most basic understanding of immunology are often incapable of evaluating those empirical claims. Indeed, those parents most likely to proclaim themselves 'educated' on the topic are generally the most ignorant."

Which might explain why the previously mentioned study's authors recommend not debating a conspiracy theorist, but instead focusing on informing the persuadable of the truth. And that might entail reminding people that growing up unvaccinated can expose children to all kinds of preventable diseases, no matter how healthy they are.

Penn and Teller's Bullshit! made a pretty good point about vaccination years ago: That even if one in 100 children developed autism after being vaccinated (which, again, isn't true), that's far preferable to the rampant disease that vaccines cause.