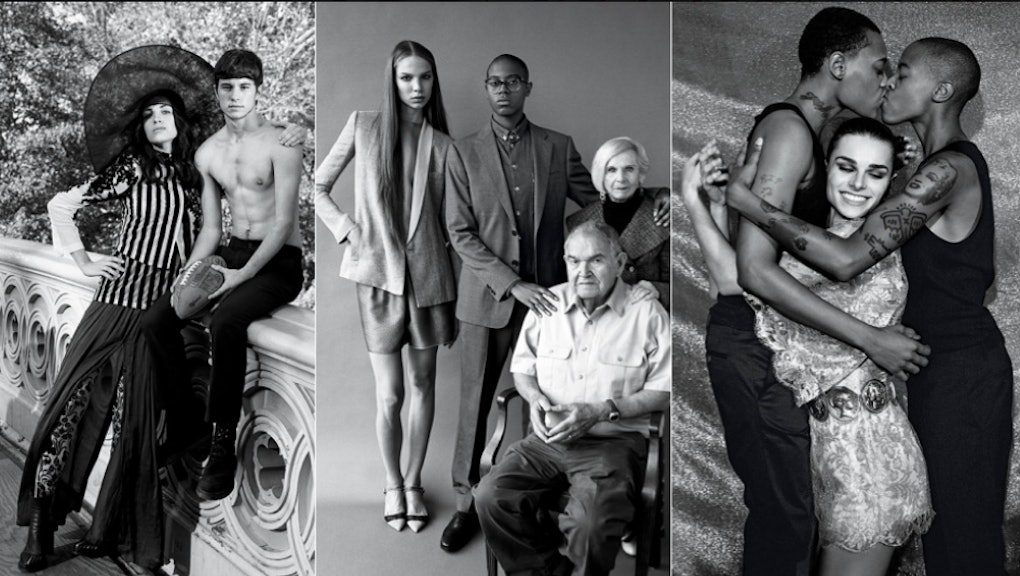 The news: Luxury retailer Barneys' has released its spring 2014 advertising campaign. Called "Brothers, Sisters, Sons & Daughters," it happens to feature 17 transgender models photographed in black and white wearing the company's clothes. It's deliberately meant to tell their stories, from their perspective.

According to project creator Dennis Freeman, the advertising campaign is meant to call attention to the lives and rights of transgender people. "I was exquisitely aware that in the last decade, the L.G.B. communities have made extraordinary advances, and the transgender community has not shared in that progress."

In addition to the promotional photographs, Jezebel reports that Barneys had Patricia Botsworth interview each model, with individual profiles running on their website over the next few weeks, and a documentary is also forthcoming.

Jezebel interviewed Ryley Pogensky, one of the models involved in the campaign:

"Part of me was like, 'Holy shit, this is amazing; this is so exciting that a huge company or dept store was using trans* people as models. But the other side of me was like, 'Ugh, fashion.' Being black and understanding how often and how prevalent fetishization still is when it comes to black people ... I was like, 'I hope this isn't something where, like, they have all the trans* men wearing tutus. It could go in so many directions ... but I can't help but be skeptical because of the way the media has portrayed, and has talked about, trans*people in the past year or so.' So I was a little scared."

But after meeting with Freeman, Pogensky said "He's really committed to sharing these stories and talking about the trans world and just really trying to uplift and give money. I was really happy when I realized it wasn't going to be some weird art school project."

According to Elle, the campaign began as a partnership with the National Center for Transgender Equality and the LGBT community center, and 10% of all Barneys online and flagship proceeds on Feb. 11 will be donated to the charities.

Why should you care? Trans people still face massive amounts of discrimination our society. Katie Couric, for example, thinks it's appropriate to interrogate trans celebrities Laverne Cox and Carmen Carrera about their genitals on national TV. And recently, a trans woman committed suicide after a Grantland reporter decided to out her on a story unrelated to her gender identity.

With all those obstacles, more visibility and understanding can only be a good thing.

In their own words: Pogensky's profile says: "What is between my legs is not thoroughly who I am. If gender is black and white, I'm grey."