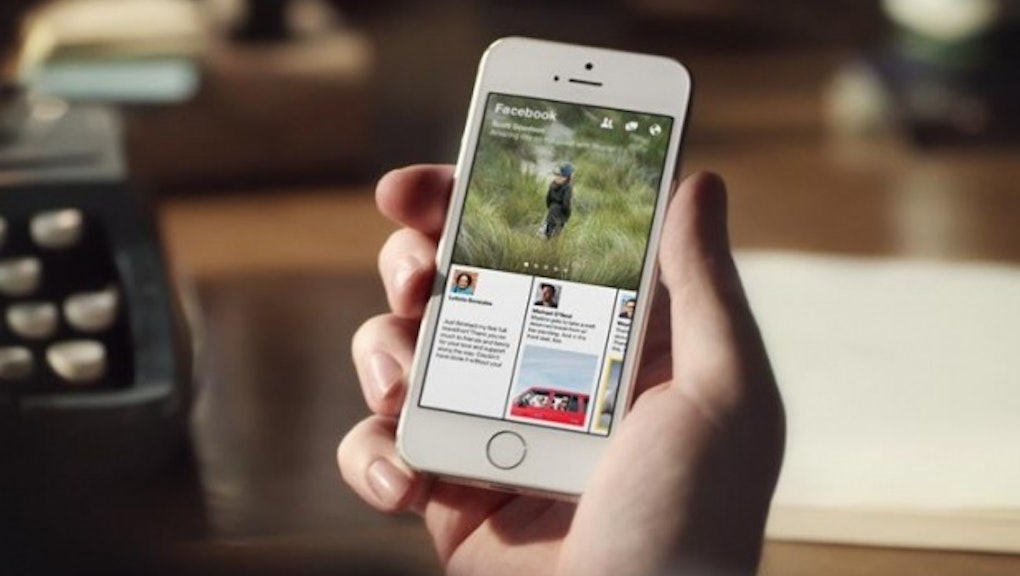 Facebook Has An Innovative New App Coming Out. And it May Be a Game Changer.

The news: Facebook has announced their new app — and this one might take the social network quite a bit closer to its goal of being your one-stop source for news as well as status updates.

It looks "freakishly" like Flipboard, an app that aggregates news from social media (and that, courtesy of Facebook, may no longer exist in the near future). Paper, curates articles and opinion pieces from an algorithm and human selection. With 19 sections including politics, tech, sports, pop culture, and "LOL," it's specifically designed to look much different from their existing apps. Paper has been under development for years, so the new launch is an important step forward for Facebook. Numerous expected features aren't implemented yet, such as personalization, and the app is still devoid of ads including sponsored content. Mashable predicts that advertising, at the very least, will likely be added as soon as Facebook is able to determine how users interact with the new product.

It's not available for users to test out until Feb. 3 (at which point it will only be available as an iPhone app), but Facebook has released a bevy of promotional material. And their goal is clear: Facebook wants to cut competing news apps out of the equation and make itself your catch-all source for news. And since 53% of revenue comes from their mobile division, it's important for the company to pioneer new services before competition gets too heavy.

"While the core business growth is going to come from the main app that exists," CEO Mark Zuckerberg said during a Wednesday earnings call, "you should also expect us to start building a few of these other things that we will focus on over time and develop into meaningful things like Messenger and Instagram are today."

How's it work? The app also folds in updates from friends, but presumably only high-quality ones. And for those people worried about whether Facebook's app will push content towards only corporate media, the reader has promised to feature "emerging voices" — or rather, what Facebook's new editorial team thinks are emerging voices. (So presumably nothing too controversial.)

Essentially, Facebook is attempting to corner the market on verticals, aggregating the best content in selected topic areas from around the web and distributing it to users through their own channel. This could be bad news for traditional aggregators like the Huffington Post if Zuckerberg succeeds in cutting out middlemen entirely.

Will it work? Founder and CEO Mark Zuckerberg is trying to move the News Feed towards quality journalistic content, making Facebook "the best personalized newspaper in the world" for each user. And the standalone app is a clear extention of that strategy.

Some people are skeptical, though, like AllThingsD, which warns that viral content the likes of which you'd find on BuzzFeed or Imgur is incredibly useful for generating massive user engagement. In fact, Facebook has deliberately held back on implementing support for some features (such as animated .GIFs) because it's worried about maintaining a clean aesthetic appeal.

But while AllThingsD warned about the difficulty of keeping a "balance" between the high-quality content Facebook wants to feature and the low-quality content users tend to spread, the new app offers a clear solution by building different pathways into the Facebook experience ... one tightly curated, and one more like your traditional, Viral Nova-laden News Feed.