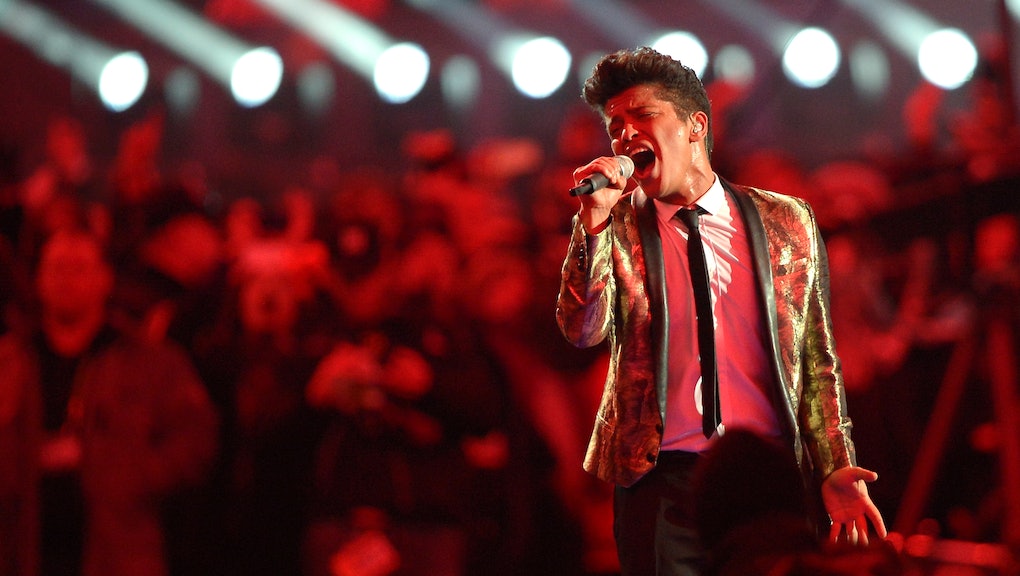 Bruno Mars Got Upstaged at His Own Super Bowl

When Bruno Mars closed Super Bowl night with the torch ballad that signified the peak of his career, there was almost no roar from the crowd. It was as if the entire audience was thinking, "What's that song called again?"

That was more or less the feeling throughout Bruno Mars' halftime show — it was toe-tapping, diverting, commercially lovable and yet ultimately forgettable. The show pulled out all the stops with its fireworks, children's choir and montage of messages from deployed troops. And Mars was a compelling performer willing to play along. But really, it all served only to prove that Mars can't carry his own weight. This singer, who started out as a Michael Jackson and Elvis imitator, is just that — an imitator rather than an innovator. Shania Twain played the Super Bowl 11 years ago, but few remember it. People will have the same revelation about Mars 11 years from now.

Mars began the show impressively enough, thrashing away on the drums next to an enormous American Flag staircase. He then jumped on the mic to belt out a spirited rendition of "Locked Out of Heaven," flanked by a grooving, gyrating band all wearing matching golden blazers. The song was flashy, sexy, well-executed and bode extremely well for the rest of the set.

However, it quickly became clear that Mars' catalogue and aura are as skinny as any of his jeans. By the time he launched into "Treasure" — the B-side to "Locked Out of Heaven" — his band was fully carrying the performance with its exuberant swaying and jumping. Most of the camerawork showed Mars on the edge of the shot, seemingly completely identical to the rest of musicians onstage. He didn't even address the crowd, and instead had a bandmate play hypeman for him.

Mars' performance was an odd amalgamation of MJ and Elvis, with hardly anything original added on. He slicked back his hair and got all spiffy like Elvis, and his busy, slippery footwork routine could have come from an MJ music video. The only differences were the essential ones — he lacked Elvis's masculine magnetism and MJ's euphoric spontaneity. He was a fine imitator and little more; his band did most of the heavy lifting. His unoriginality became even more obvious when the Red Hot Chili Peppers took the stage. They looked a little too old to be out there without their shirts on, but their music and stage presence reminded just how original their sound was when it first debuted. And, unlike Mars' own, their song was a classic.

Mars' band faded into darkness for the final number and was immediately replaced by two of the most showy, American things possible: the troops and fireworks. Look, I'm a big fan of troops and fireworks. But if you had a truly great song that could stand on its own as a Super Bowl anthem, then it wouldn't need a set of introductory troops on video or fireworks cascading all the way through. I don't blame Mars for using these cheap tactics; after all, the closing songs of the past 10 years have included impossible-to-match classics like "Hey Jude," "Satisfaction," "Purple Rain," "Won't Get Fooled Again," "Like a Prayer" and "Halo." In fact, all of the pomp and glory did well to hide the rather uncharismatic man singing a corny love song on a glowing circle at the 50-yard line.

But history usually tells the more complete story, and it seems likely that Bruno Mars and his rollicking band will fade into it. Those other Super Bowl shows ended with songs that defined generations. Bruno Mars' ended with a song that entertained us well, but did little else.