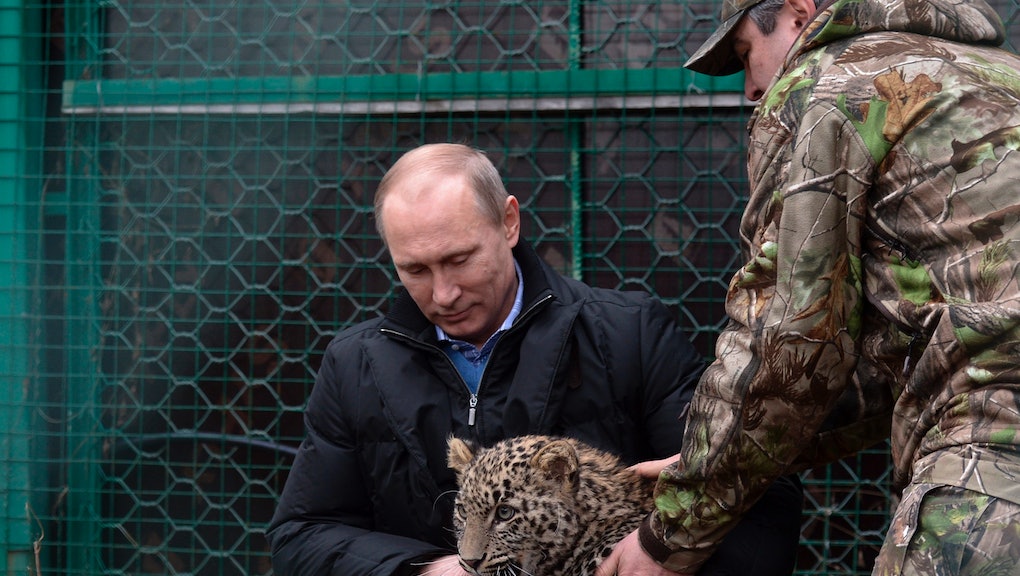 The news: Exhausted by his repeated efforts to deny gay people a voice, Russian President Vladimir Putin took a break from his insufferable bigotry to pet a rare Persian leopard cub this week.

The presumably consensual petting took place at Sochi National Park, in a breeding center where Persian leopards are being bred for reintroduction into Russia’s North Caucasus, where the species went extinct in the 1970s.

This same leopard cub, named Grom (Thunder), scratched one reporter on the hand and bit another on the knee. Putin remained unharmed, leading to speculation that the cub may sympathize with the president’s homophobic policies.

The background: In the months leading up to the Sochi Winter Olympics, Putin has come under fire for Russia's ban on "homosexual propaganda" through gay rights rallies and possibly the display of rainbow colored flags and outfits. Tough break, Germany.

Putin's feline rendezvous is the latest in a long history of fraternization with wild carnivores. Here he is with a tiger:

And a polar bear:

And here is emerging shirtless from the wilderness with a rifle, just because:

Putin's wildlife adventures burnish his "outdoorsy" image, and highlight his "concern" for the environment despite damning evidence that the upcoming Olympics have reneged on nearly all of their "green" promises. The games are also way over budget, clocking in at a record $51 billion.

The takeaway: It's not easy being president. Luckily, you also have access to sweet R&R options, like playing with sedated/dead/underage carnivorous mammals. Whether Putin arrives at this week's opening ceremonies riding a grizzly bear remains to be seen.