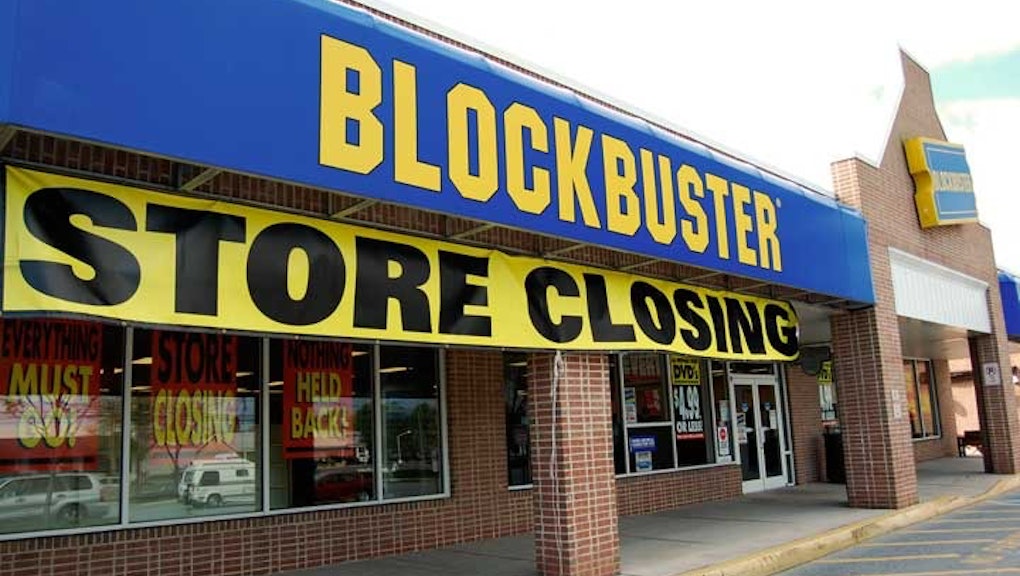 The news: Did Netflix really kick Blockbuster’s ass in a 17-year war marked by endless late fee-related shouting matches and Hot Tamale binges? Kind of. But according to this colorful infographic, it’s more complicated than that:

So what really happened? Blockbuster was pooping the bed long before Netflix became a major player. Between 1997 and 2005, the video rental chain saw a steady decline in profits, highlighted by its squandered opportunity to purchase Netflix for $50 million in 2000. Ironically, the story goes, Netflix founder Reed Hastings launched his company in anger, after seeing his late fees from returning Blockbuster’s copy of Apollo 13 six weeks late. Talk about poetic justice.

Other highlights include Blockbuster’s attempt to enter the video streaming market through a partnership with Enron, which ended well for nobody. Hastings also told one analyst that Blockbuster was throwing “everything but the kitchen sink” at Netflix in an effort to compete. Shortly after, he received a package from Blockbuster: a kitchen sink.

The fact is, Blockbuster was toast long before it declared bankruptcy in 2010, when it posted losses of $1.1 billion. Where Netflix invested in expanding its streaming options, the rental chain invested in selling more candy to customers. It was a classic instance of shooting oneself in the foot. And as the infographic makes clear, “Netflix didn’t shut down Blockbuster, but they did steal the market Blockbuster needed to move into.”

The takeaway: Netflix won the war for our hearts and minds, but at what cost? Sure, the vast library and streaming options are great, and the prices are reasonable. But recent rumors of a price hike for some services could be a harbinger of changes to come. In the end, it matters little: even at higher prices, behavioral psychology suggests we’ll stick with Netflix because it’s still a bargain relative to the broader market. You have us in the palm of your hand, Mr. Hastings.

Keep giving us what we don’t know we want.