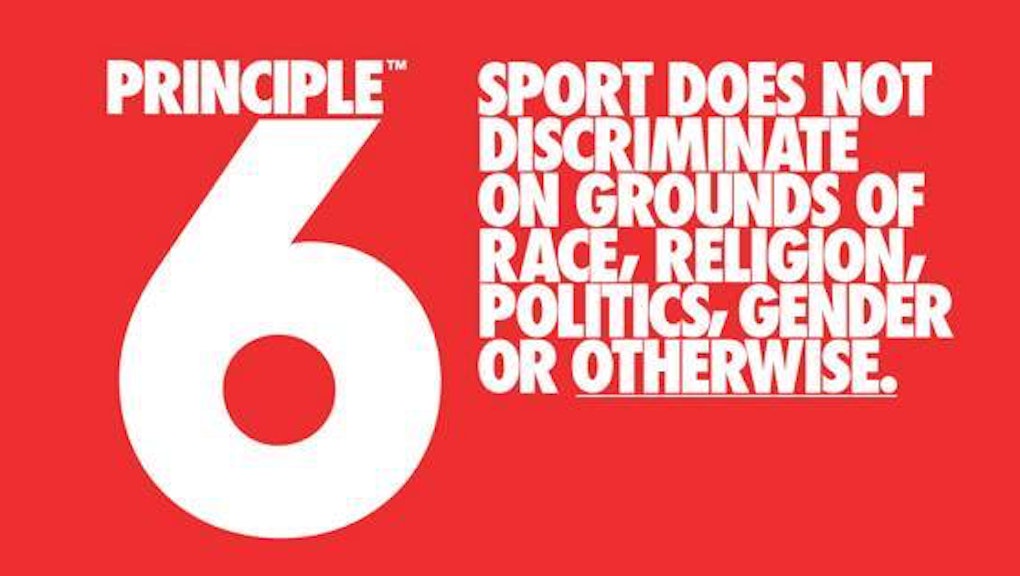 Russia's Anti-LGBT Laws Violate Everything the Olympics Stand For

It's getting harder to feel that old-time Olympic spirit. Dig too deep and you become disillusioned. There’s always something — the politics, the judging scandals, the greed, the commercialization, graft and bribery, the terrorist threats, and yes, the human rights violations.  The 2014 Winter Games in Sochi are a perfect example of the abuse of Olympism. And Russia’s attack on its LGBT community threatens the credibility of the Olympic Movement to its very core.

I competed in the 1968 Olympic Games in Grenoble, France, winning a silver medal in long track speed skating at a day shy of my 22nd birthday. Even then, politics were a part of the Games. The Olympics, no matter what the International Olympic Committee (IOC) and others would like, cannot be divorced from the wider society or political milieu.

The Vietnam War was a ghostly presence during those 1968 Games with the Tet offensive occurring right during the Games themselves. As pink paper petals scented with French perfume were floating over the opening ceremonies in Grenoble, American bombs were falling over Vietnam. Did I realize that the bloodiest battle of the Vietnam War was going on while I was celebrating my Olympic moment? Hardly. I was young and politically naïve.

That changed a few months later at the 200-meter medal ceremonies of the 1968 Summer Olympics. I vividly remember watching as sprinters Tommie Smith and John Carlos raised their black gloved fists in the air. I was shocked, it was so unexpected, so dramatic. The IOC was swift and uncompromising in its judgment of Smith and Carlos — political statements are forbidden by Rule 50 of the Olympic Charter. Unless Smith and Carlos were immediately sent home, the IOC promised to expel the entire U.S. track and field team from competition. That’s power that as an athlete, you don’t want to provoke.

Today’s Olympians head to the Games well-aware of all the winds swirling around Sochi. They take to the ice and snow knowing that according to Principle 6 of the Olympic Charter: "Any form of discrimination with regard to a country or a person on grounds of race, religion, politics, gender or otherwise is incompatible with belonging to the Olympic Movement."

There is a huge disconnect between Russia’s anti gay legislation and foundation of Olympism, which professes to be “a way of life based on the joy of effort, the educational value of a good example, and respect for universal fundamental ethical principles.” At age 21, I was a true believer. Much has changed in 46 years. That’s why I am engaged with the Principle 6 campaign, to support equality and act in solidarity with the LGBT Russian community.

It’s not absolutely clear what the IOC or USOC plan to do to safeguard LGBT athletes during the Sochi Olympic Games. IOC President Thomas Bach recently announced that athletes are free to express their opinions about the Russian law in media interviews, but not on the field of play. He also said there will be cordoned off “protest zones.”

So what does “no discrimination” mean exactly? What constitutes an expression of your “opinion”? Will same-sex couples holding hands be safe from scrutiny? Will a skater caught wearing a rainbow pin be harassed? What specific acts qualify as “demonstration or political, religious or racial propaganda” as outlined in Rule 50 of the Olympic Charter – acts which may lead to expulsion from the Games?

It’s all too depressing. That such questions are necessary in the context of the Olympic Games is beyond me. It is a shame and an embarrassment for all of us who have been involved with the Olympic movement, and who have not become so jaded over the years so as to have given up on the entire project.

That athletes should find themselves confronted by outright bigotry during these Games is a matter for which the IOC is ultimately responsible. There ought to be a rule that prohibits the awarding of the games to countries that violate internationally recognized standards of human rights. But then, who would qualify? And how is it that the IOC, the USOC, and the corporate sponsors allowed Putin’s law to get passed in the first place? The games were awarded to Russia in 2007. Were they caught so off guard that they could not have applied pressure to have the signing postponed? Something, anything?

I don’t think we should expect any athlete to risk being sent home for protesting Russia’s human rights record. Better that we, former Olympians and supporters of the athletes, speak our minds at a safe distance. And if the athletes should take their courage and stand up “for or against something,” let’s applaud them and pray that no one is punished.