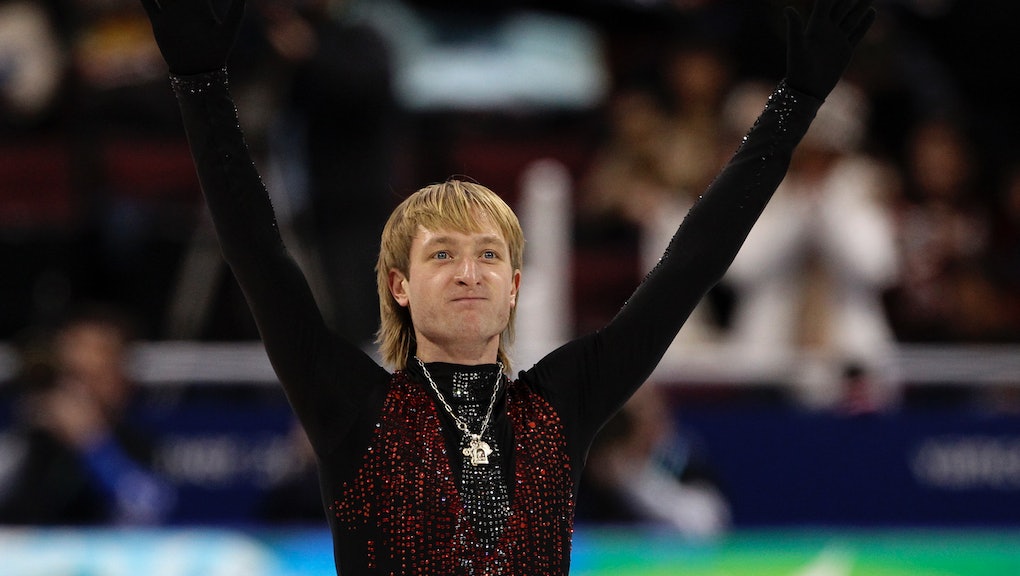 6 Most Fascinating Athletes That We Wish Were on Team USA

I'm not one for sporting events — something that seems to be all too clear in 2014, between the Super Bowl, the Winter Olympics and the World Cup.

So what does it take for someone like me to watch a high-profile sporting event? Cheese. There's nothing like a good, over-the-top performance. And sports like figure skating never fail to deliver on this front.

But big sporting events also mean a bizarre backstory. They can also teach the crazed people of the Internet which athletes have a GIF-worthy face (I'm looking at you, Tom Daley).

Without a doubt, the U.S. line up of fresh, talented and determined faces will bring gold home. But while some of the other 87 countries competing in this year's games might bring home medals, their athletes have a certain eccentric flair that the U.S. team won't be bringing to the table.

Here are six people from other countries that I wish were part of the U.S. crew:

There's Prince Hubertus von Hohenlohe, descendant of German royalty. He's the lone representative of Mexico in the Sochi Olympics. The 55-year-old is one of the oldest athletes to compete. He's also a singer and a photographer, and despite competing six times in the Winter Games, hes never won a medal.

But his eccentric style and flair have captured headlines globally. He will be hitting the slopes outfitted in a mariachi costume, which is how he pays homage to Mexican culture. While he doesn't see his luck changing this year, he's certain that he'll be the best dressed.

He has also offered to outfit Mexico's sole para-Olympian and fellow skier, Arly Velasquez in the same outfit.

In addition to his style, von Hohenhole has also tried out a pop career. He released this inspirational song, "Higher than Mars":

He looks a bit like Julian Assange playing Draco Malfoy — and he has a mane to die for. Russian figure skater Evgeni Plushenko tops my list, but not only for his enviable hair.

Plushenko is a decorated skater (a three-time World Champion!) who managed to be a part of Russia's Eurovision-winning performance in 2008. He's also had a go at politics.

One notable performance came back in 2001, when Plushenko was 18 and donned fake muscles for a raunchy skate to Tom Jones' "Sex Bomb":

He's also featured in this dramatic music video, ice skating to the music of Edvin Marton.

It's a level of glamour that the U.S. team can only dream of.

Bruno Banani, a competitor from Tonga, went to great lengths to achieve his Olympic dreams.

With a quick Google search on his name, you'll find an Olympic hopeful, as well as a German fashion brand. It's no coincidence: Banani, who was born Fuahea Semi, agreed to change his name and move to Germany to train in order to be sponsored by the brand.

While the company attempted to pass off the athlete's name as a coincidence (and even told him to claim that his father was a coconut farmer), the marketing hoax was eventually exposed.

Vanessa Vanakorn will be hitting the slopes as the female representative of Thailand's alpine skiing team.

But she is also known as Vanessa- Mae is, a world-renowned, multi-millionaire musician. She was a child prodigy, and eventually moved on to pioneer "violin techno-acoustic fusion," which sounds a bit like this:

How many classical musicians have music videos that involve the writhing, naked bodies of dancers and skimpy outfits that we expect from mainstream pop artists?

The 35-year-old has dreamt of competing in the Olympics since she was a teenager. Even though she was raised in the U.K., her father is Thai, and the country decided to bring her onboard.

Superstar Kim Yeona will be a force to be reckoned with at the Winter Olympics: The 23-year-old won a gold medal back in 2010, and landed a world title last year.

Her success as a figure skater has made her a superstar in her country. She's known as "Queen Yeona" in South Korea.

She's breathtaking on ice, and it turns out that she's not a bad singer either. Here she is performing with South Korean pop star Taeyeon:

Tina Maze, 30, has two silver Olympic medals from the 2010 games. At the 2013 Alpine World Ski Championship, she also won one gold and two silver medals.

But Maze is not only a contender for the gold in Sochi; she's also a successful model and singer back in Slovenia.

She released an amazing music video for her Eurotastic song "My Way is My Decision":