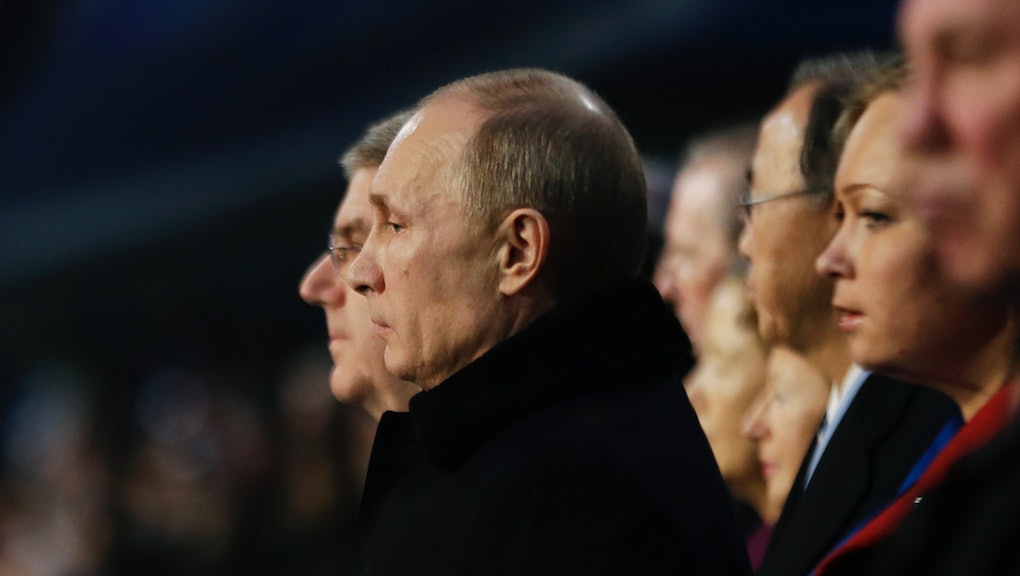 The 10 Most "Putin Faces" Putin Made During the Opening Ceremony

While the opening ceremony at the 2014 Sochi Olympics was filled with dazzling fireworks, light shows and snowy special effects, perhaps the greatest marvel was President Vladimir Putin's imperturbable face. Amid criticism over his government's anti-gay legislation, the shoddy state of facilities in Sochi and the tension caused by repeated terrorist threats, Putin made a stoic appearance at the rather controversial ceremony. Here are 10 pictures of his most Putin-y faces:

Putin waits in the wings to be introduced at the opening ceremony. A case of stage fright, maybe?

Putin is chilling all by his lonesome in the presidential lounge. Also, notice how the state TV is airing rehearsal footage of the Olympic rings, cutting away from the spectacular failure when the fifth snowflake failed to open.

ICYMI, this is what the rest of the world saw:

This is Putin's schmooze face. Really.

Not even VIP seating (with UN Secretary-General Ban Ki-moon and International Olympic Committee president Thomas Bach) is enough to fully cheer Putin up.

A solemn look during the Russian national anthem.

He almost manages a smile here.

Putin is seated next to Irina Skvortsova, a former bobsledder. After a life-threatening injury in 2009, Skvortsova retired from sports, but Putin invited her as a guest of honor.

Just look at those steepled hands.

Despite the Snowflake-That-Shall-Not-Be-Named, the rest of the ceremony is relatively glitch-free. Putin is pleased in this picture. I think.