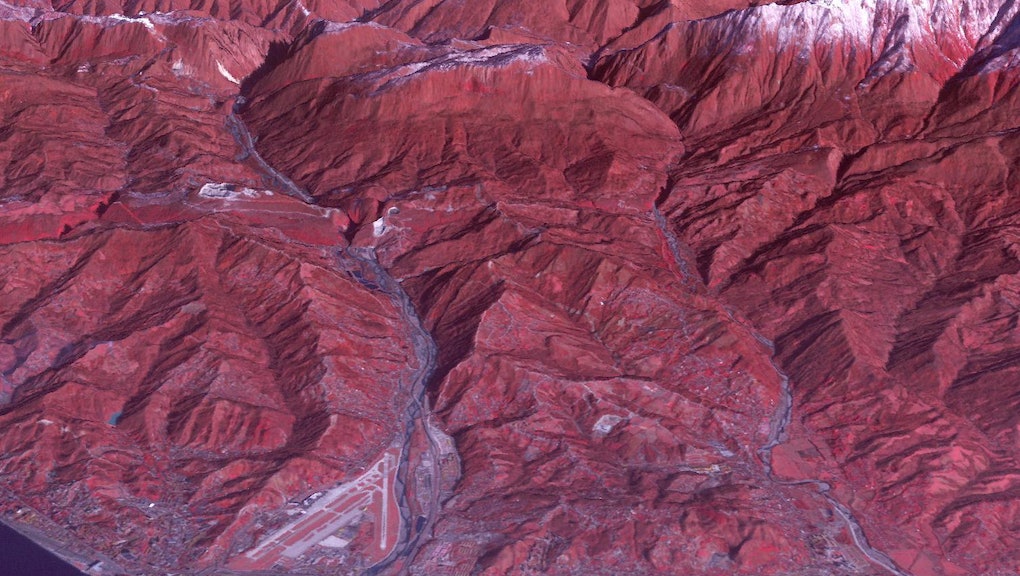 While many on the ground have been bickering about the state of Sochi infrastructure using the infamous Twitter hastag #SochiProblems, NASA offers a contrasting view from the vantage point of outer space — and it's gorgeous.

Two images of the Sochi Olympic venues have been captured by NASA's Terra satellite. The first image (above) shows the circular Sochi Olympic Park Coastal Cluster — containing the venues for indoor sports such as hockey and the skating events — on the coast of the Black Sea. The Mountain Cluster, which hosts Olympic alpine events, is located in the snow-capped valley at the top right of the image. The city of Sochi itself, which has a population of around 400,000, is not visible in the picture.

A second satellite image shows a detailed view of the Mountain Cluster, where the skiing and snowboarding events are being held. In the center of the picture is the Rosa Khutar ski resort. The runs, which will host six new skiing and boarding events, are visible on the shadowed slopes on the left-hand side of the valley.

The images were recorded using Terra's Advanced Spaceborne Thermal Emission and Reflection Radiometer (ASTER) instrument, which observes the Earth in 14 wavelengths to create detailed images that include surface temperature, elevation and reflectance information. Areas of vegetation are seen in red, snow in white, buildings in gray, and the sea in dark blue. The Terra satellite launched on Dec. 18, 1999 and carries five sensitive instruments to record data about the Earth's climate, atmosphere, energy, water cycle and land surface.

The Winter Olympics have been hosted on three continents, but never in a country in the southern hemisphere. NASA has also recorded images of previous Winter Olympic host venues, as shown below.