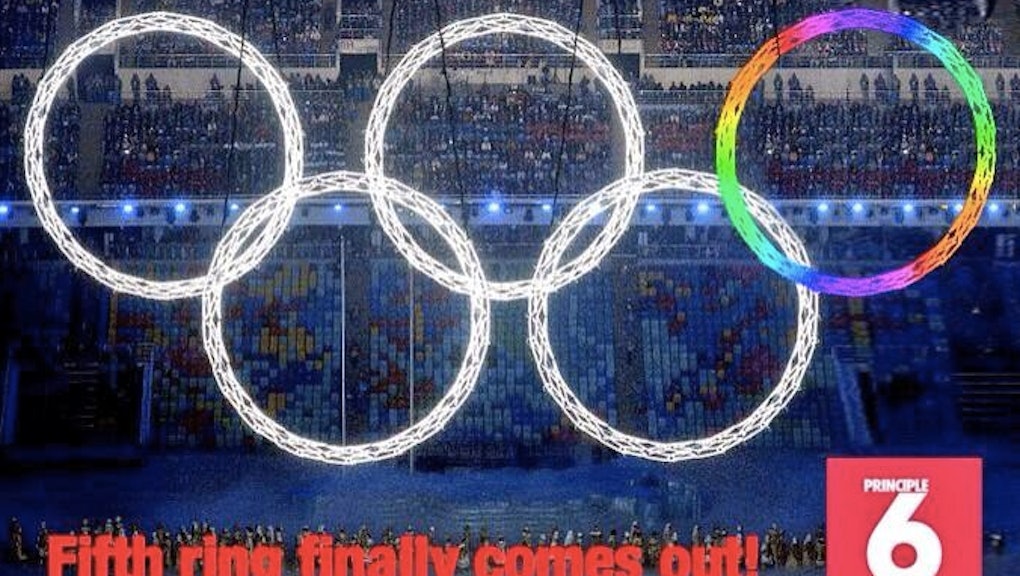 Before the Sochi Olympics started, the games were already plagued with controversy and scandal from Russia's latest anti-gay legislation. For months, LGBT and human rights activists and organizations, including the Human Rights Campaign, urged international corporate sponsors to take a stand against sanctioned human rights violations.

Nonetheless, several powerful, global brands including Coca-Cola, McDonald's, Proctor & Gamble and Visa, continued to serve as corporate sponsors of the Russian-hosted games without applying any effective pressure on Sochi and Russian leaders to end sanctioned discrimination and violence in the host country.

Their silence has angered activists, who are now trading in petitions for hash tags and turning to social media to draw attention to the violence and human rights violations against members of the LGBT community in Russia.

Below are powerful boycott and protest movements fought on YouTube, Facebook and Twitter that have changed the conversation surrounding the games entirely and publicly shamed corporate sponsors of the Sochi Winter Olympics.

Two days before the Sochi Winter Olympics opening ceremony, European Parlaiment member Michael Cashman spoke out against Russia's anti-LGBT legislation by cutting his VISA card in protest of the company's sponsorship of the 2014 Winter Olympic Games in Sochi.

Cashman isn't the only one person who has destroyed his VISA card in protest of the Olympic sponsor's silence. On Twitter, several join the campaign to shred their Visa cards — and even encouraged others to do so:

McDonald's originally created the hashtag #CheerstoSochi to cheer on American athletes, but quickly found the hashtag being used by LGBT activists to challenge Olympic sponsors, such as McDonald's, for not speaking out against Russia's discriminatory policies.

Queer Nation NY created a parody site of McDonald's cheerstosochi.com to expose violence against gays in Russia and call for boycotts of all sponsors of the game.

Queer Nation's cheerstosochi.org encourages visitors to share or create their own memes protesting sponsorship. Below are a few examples:

3. "Anything But Coke" campaign has students dumping Coca-Cola on the ground

The "Anything But Coke" campaign now has nearly 6,000 followers on its Facebook page. The group is responsible for the protest at Wesleyan University on Jan. 26, when students dumped bottles of Coca-Cola onto the ground to protest.

The campaign quickly made its way to college campuses across the globe.

Queer Nation NY's version of Coke's famous 1970's commercial "I'd Like to Teach the World to Sing (In Perfect Harmony)" quickly went viral after launching. The edited video includes powerful images of LGBT protestors being assaulted in Russia.

It's true that Coca-Cola is being hit hard by LGBT groups on social media:

The Canadian Institute for Diversity and Inclusion published a Public Service Announcement on Feb. 4 to protest the anti-LGBT discrimination in Russia with the following:

"The games have always been a little gay. Let's fight to keep them that way. Show your support for the equality of all athletes by changing your Facebook profile picture with us at http://bit.ly/keepthegamesgay."

The video has been viewed over 4 million times in less than a week.