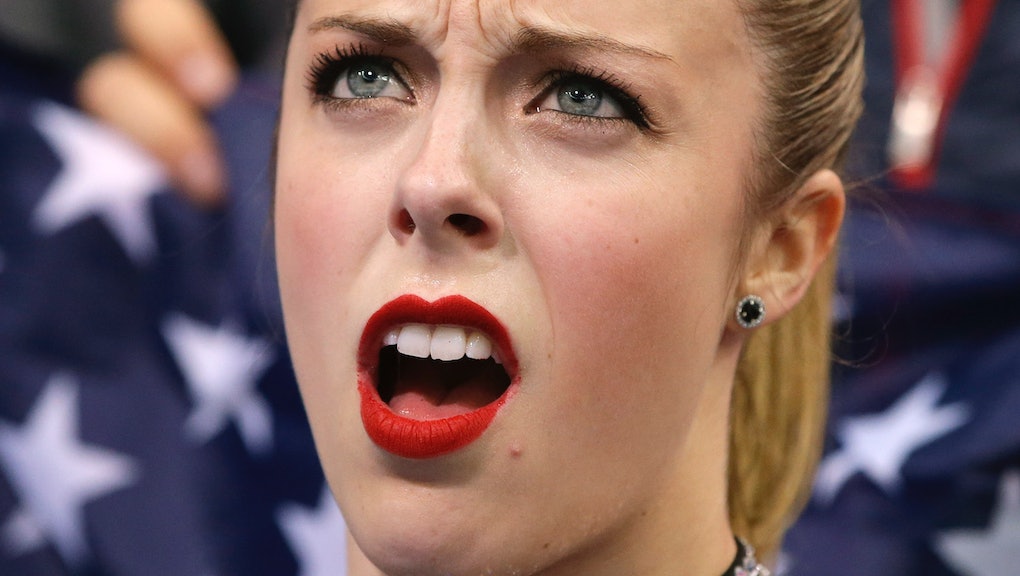 When American figure skater Ashley Wagner saw her scores for her routine in the women's team short program competition, she was not impressed. After skating a relatively clean routine, Wagner looked up to the scoreboard to see she had been awarded a 63.10, much lower than she had expected and placing her fourth for the night.

"I know roughly when I skate a good program where the score should end up," Wagner said. "So to score that low was very disappointing. I was hoping to score around somewhere close to my personal best (69.26)."

Actually, "not impressed," might not be the most accurate — her sentiment was more: "bullshit."

But was it bullshit? While many fans watching on thought Wagner had done a good job — better at least than Japan's Mao Asada, who placed third despite falling during her routine — surprisingly enough, figure skating scoring is not as simple as "that looks pretty good."

On Sunday night, one Redditor posted a comment giving a basic explanation of the new figuring skating scoring system that sheds a lot of light on the situation. Reddit user pastpresentfuror explains that each element in a routine (jump, spin, footwork, etc.) has a base point value determined by its difficulty. A technical specialist watching the routine determines exactly what element the skate is trying to perform, assigns a base value, then the judges add or subtract as much at 3 points either way from that base value — though subtractions and additions are usually made in small decimal amounts. Judges will award extra points for factors such as a lot of height on jump, speed at landing, fast and centered spins, and subtract points for landing on two feet, under rotating a jump or touching a hand down on landing. Falling is an automatic one point deduction.

"Let's say a triple loop is worth 6.0 points. Ashley Wagner does a triple loop, but two foots it heavily. She gets a 6.0 base credit, but the average of the judges' grades of execution was -1.4. So she gets 4.6 for it. If she does this across several elements (and she is known for making small mistakes), those lost points really add up. 3 or 4 small mistakes can be worse than a fall, particularly if the mistakes are on relatively easy elements."

The takeaway: Falling is not a death sentence, but lots of small mistakes can be. Often, these are mistakes that an average fan watching won't even notice, but the highly trained judges will. Even if a skater lands perfectly, it's totally possible she under-rotated or didn't get as high off the ice as she could have, and the fan at home could have no idea.

But shouldn't this be about fan enjoyment and not just a show for the snooty judges? Well actually, this scoring system was partially developed to encourage skaters to attempt harder elements. Even taking into account the deductions, skaters who attempt harder elements will be starting with a higher base point value and have more potential to really rack up the points. Skaters who play it safe just won't have the opportunity to score nearly as high, no matter how well they skate.

While this certainly isn't definite proof that Wagner deserved the score she got, it's an interesting look into the figure skating scoring system, and one that proves this isn't as simple as it seems. Wagner still put on a performance good enough to quiet the critics who said she shouldn't have made the team at all and to advance the U.S. to the next round, so it's not all bullshit.