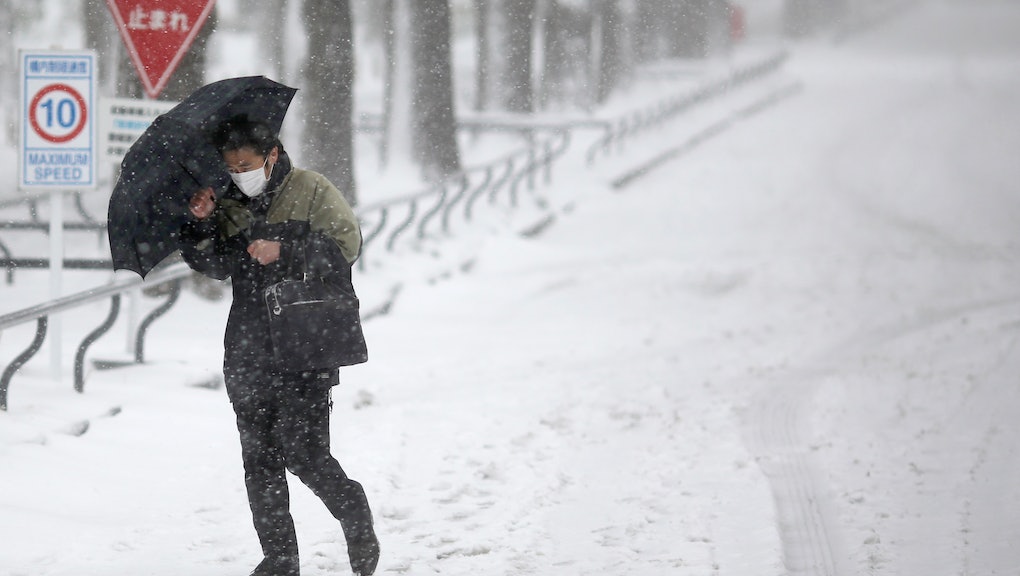 A dangerous blizzard is crippling Japan. The storm has already claimed the lives of 11 people and injured upwards of 1,200.

It's been 45 years since Tokyo has been this hard by snow. A remarkable 10.6 inches covers the city. Car, rail and airline transportation are impaired — with over 300 domestic flights cancelled. More than 20,000 homes are without electricity. Warning signs prompted the Japan Meteorological Agency to issue a heavy snowfall alert for central Tokyo on Saturday — the first in 13 years.

To put this in perspective, meteorologist Nick Wiltgen said in an interview with Weather.com that Tokyo's normal winter climate is similar to the southeastern U.S. (think Georgia, South Carolina and Florida).

"You have to have the perfect combination of a potent offshore low pressure system passing just south and southeast of the city and a very cold air mass in place over the city itself. This storm had those necessary ingredients, and the snow naturally followed," Wiltgen said.

Here are the dramatic photos from Japan:

The blizzard left 14 inches of snow in the country's northern city of Sendai — the heaviest snowfall for the city in 78 years.

2. Working Around the Clock

City employees work to clear the sidewalks for pedestrians in an effort reduce the number of snow and ice-related injuries.

The snow didn't stop some visitors from taking pictures of the beautiful Enoshima Shrine outside of Tokyo.

A person in Tokyo tweeted images as the snow began to accumulate Saturday night. Traffic accidents and pedestrian falls have accounted for citizen casualties.

After former leader Naoki Inose was forced to resign on corruption allegations, Tokyo was in the market for a new governor. But the weather affected voter turnout on Sunday. Only 46% of people voted, a low in Japan's history. Favored candidate Yoichi Masuzoe won.

For many people across Japan, this winter will be hard to forget. The high number of casualties are mainly from cars skidding on icy roads. Here, two men walk down a snowy road.

7. Business and Schools Shut Down

Many universities delayed the prestigious entrance exams. Train delays and cancellations slowed commuters who tried to brave the snow.

The snow added an eerie yet beautiful look to Japan's intricately designed shrines and historic buildings.

For those safe but stranded at home, the blizzard was a chance to have some wintry fun.