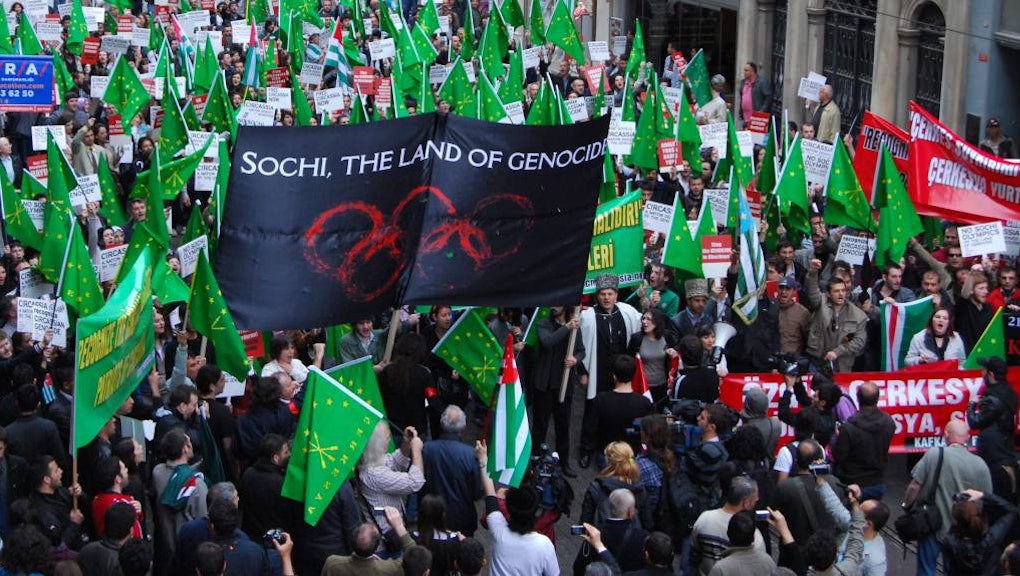 Dear Putin: The Winter Olympics Will Never Cover Up the Genocide of My People in Sochi

My name is Tamara Barsik and I am a member of the No Sochi 2014 Committee, a campaign focused on calling attention to the genocide that happened on the grounds of this year's Winter Olympics 150 years ago.

We wanted to be in Sochi protesting the opening weekend, just as we had done at the past two Olympic ceremonies, but that was not an option for us. It's hard for people so publicly against the Sochi games to get a visa to Russia these days.

Some of my friends in Russia had a chance to protest though. Four people were reportedly arrested in Sochi for waving Circassian flags. And 37 protesters who gathered in Nalchik, the capital of the Caucasus republic of Kabardino-Balkaria, were arrested. Their flags and banners reading "Sochi Is the Land of Genocide" were confiscated. According to Circassian activist Aslan Beshto, a majority of the protesters were young people under 30 who organized via Facebook. Their gathering was peaceful and yet they were beaten and arrested. Not very Olympic-like from the country hosting the games.

Based on your comments yesterday when you were addressing the Public Council for the Olympics, you believe the Circassian outcry against these Olympics are a ploy by the West to continue the "Cold War mentality" against Russia?

Circassians have been mistreated for over 200 years now, both inside the Caucasus and in Diaspora. You have no idea how we feel. Let me explain.

First, a little about myself. I am a part of the Barsaqua clan. The root of our name is Bersir, which in our language, Adighabza, means "person who talks too much," so I suppose it is a family legacy to speak out. Barsaqua's are Ubykh, a Circassian tribe that inhabited Sochi and once numbered a quarter million people.

The author protesting in London. Image Credit: No Sochi 2014

Today, the Ubykh no longer exist in our homeland. There are around 40,000 living in Turkey and a handful of families in other countries. Our language is extinct; the last remaining Ubykh speaker died in 1992. As you know, the Ubykh are only one of the 12 Circassian tribes that were decimated by the Genocide committed against our people in and around Sochi.

Our nation, Circassia, had a population of almost 3 million, but by the time the Genocide was over only one-third of our nation remained. Those who survived the massacre were forced into exile. Today nine out of 10 Circassians live outside our homeland. Our youth live with an identity crisis, our language, Adighbza, is endangered and we face total assimilation in the coming years if things do not change.

Over the next two weeks when you are awarding medals of gold, silver and bronze for amazing athletic prowess, Circassians will be sitting at home thinking of the military medals that were awarded on the same spot in Krasnya Polyana on May 21, 1864 during the Victory Parade over Circassia.

My family immigrated to the United States in the 1950s, and the majority of my New Jersey Circassian community hails from the Golan Six-Day War of 1967. The refugees of that conflict had nowhere to go. They applied for repatriation to their homeland, but because the Iron Curtain was up at that time, the Russian government refused them. They instead immigrated to New Jersey where we started over again. Today, I still have family members living in Syria, as does most of the community here. You can't imagine how hard it is get on the phone and listen to them talk about their villages being destroyed and lives being taken. Time and time again, these refugees have been denied the right to return to their homeland in the Western Caucasus.

And this question also comes up in Russia: three men arrested last Friday in Nalchik for protesting against the Oympics are Circassian-Syrian refugees. Their sentence is deportation from Russia. Where do they go now? Back to Syria? I can’t help but think of the past and how it’s on repeat over and over, continuing our genocide.

A protest against Sochi in Taksim, Turkey. Image Credit: No Sochi 2014

So why might the Circassian people be angry? Why might they be speaking out now? If the United States was able to take in Syrian-Circassian refugees and enable them to flourish into an educated, thriving community, why can't Russia do the same? Russia did so in 1998 with the Kosovar community. Why is the answer always no for Circassians?

Remember how your Olympic Committee promised there would be a Circassian component to these games? Well, we watched the opening ceremonies, and there was none. We againsaw Greeks on the shores of Sochi and no Circassians in sight.

But even if you don't acknowledge us, we're still there.

Did you know that Sochi is derived from the Circassian word, "Shache"? It means land between mountain and water.

Maybe you can ask for a moment of silence for the millions of lives that were lost where you will be standing. And maybe you could allow any Circassian living in Diaspora today the full right of repatriation back to their homeland if that is their personal wish.

President Putin, taking these steps will begin to heal our wounds and help ensure that our people and culture will live on for many generations to come. We are a non-violent people, who only wish to see our next generation born in our homeland.

President Putin, you could leave things as they are, proceed as usual and watch the Caucasus crumble. Or you could leave the Caucasus and Russia a better place for everyone by admitting the crimes of the past, stopping the human rights abuses at present and helping Sochi's indigenous nation come home. It is your legacy and the choice is yours. As for us, we are going to continue letting the world know our story. That is our choice.

PS - Please stop the deportation processing of Yasser Stas, Nart Abaza and Ayal Othman, and grant these men asylum.  Please release Anzor Ahohov, Aslanbek Ahohov, Avis Krasovskis, Aslan Begidov, Kazbek Tekushev and anyone else under detainment because they chose to express one of their basic human rights – freedom of speech – during the Sochi Olympics.