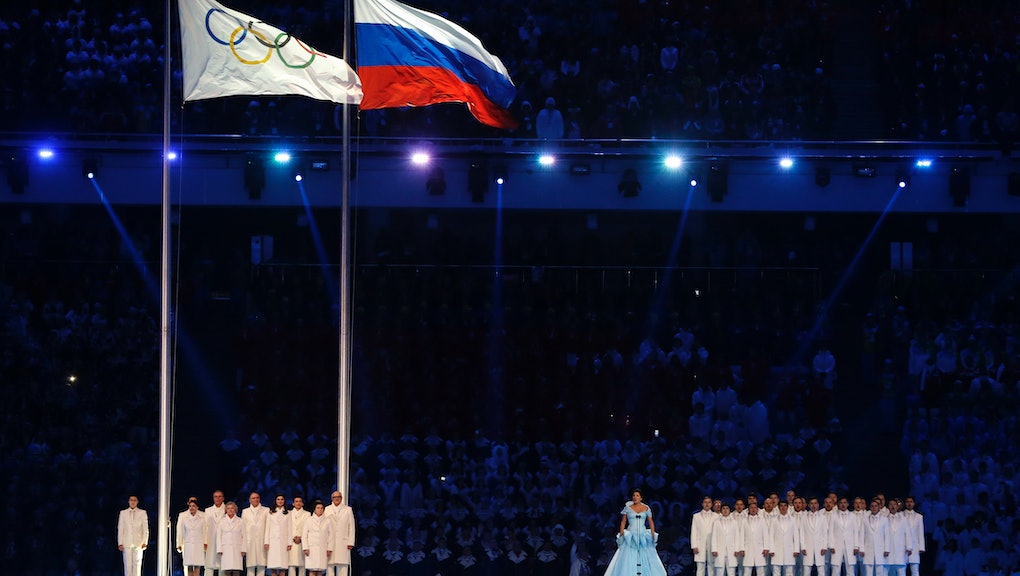 NBC's coverage of the Olympic opening ceremonies drew heavy criticism, but no statement shocked American viewers like the branding of Communism as one of history's most pivotal experiments. Americans acted as if they had personally suffered in a Stalinist gulag, attacking the ceremonies for leaving out large chunks of Russian history. The Soviet period, in our mind, was glossed over and glorified, where it should be vilified.

The public outrage primarily plagued conservative critics. Glenn Beck likened the USSR to Darth Vader and the galactic empire, saying "The entire society was about limitation. It wanted to be an evil empire, and it was." Our vicious dissection and analysis of a show meant to entertain and educate us on the host country shows a lingering and distasteful Russophobia in our country.

Last year, President Obama accused Vladimir Putin of being stuck in a Cold War mindset. According to Western and social media outlets, it looks like we really never got over it, either. The months leading up to the games were filled with doubts on Russia's preparedness to deal with Caucasian terrorist groups, so much so that the United States has two warships stationed off the coast of the Black Sea resort town in case of emergency, and several countries have offered intelligence and security support. Days before the games, reporters complained of the horrors of missing doorknobs, shower heads, Chobani and other Western essentials.

Even national news outlets like the Washington Post, the Guardian and Time Magazine came out with quality titles like "15 signs that Russia is not very ready for the Olympics" and "Sochi 2014: Rising temperatures turn organiser's plans to slush and mush" and of course this gem from Buzzfeed, "Photographic Proof that Sochi is a Godforsaken Hellscape Right Now." The Guardian even compares Putin to Adolf Hitler in one piece, perhaps forgetting the largest casualties of WWII were born by the Soviet Union.

Is this Western inability to understand Russian culture and society, or a lingering prejudice? Russia is perhaps the only society which is predominantly Christian, Caucasian and not a part of the West, and we aren’t in a rush to understand our unique differences. Where Russian ideals and way of life deviate from ‘Western culture’, the entire population is painted as backward and undeveloped, as it was in American media during the Cold War.

For a majority of Russians, the Soviet Union holds feelings of nostalgia and of a stable, pleasant life. A December poll showed only 7% had negative associations with the word communism. On the other side of the curtain, Russians credit the USSR with social security and employment guarantees, a sense of community and willingness to help one another. While it should be noted that polls are not entirely reliable in Russia, this sentiment is certainly widely-felt, in my experience.

Not only is this cultural warfare on Russia unwarranted and distasteful, but it is also unprecedented for the Olympic Games. Despite some "Free Tibet" protests and light commentary on human rights abuses, we managed to keep our racism in check for the Beijing Olympics, focusing on Chinese government and officials, not the people themselves. So why not for Russia, for Sochi?

Our national dialogue has shifted from criticising leadership and corruption to blanketing the population with negative attributes. Even further, we enjoy it. We revel in the Cold War-era struggle for supremacy, constantly comparing the two societies that were not long ago locked in a race to be the superior superpower. The American people should know better not to criticize an entire country for the policies of one leader, or to hold a decades-old grudge. Any one of us who has travelled outside of the North American bubble has experienced the frustration of living in the shadow of our own government's scandals and policies. If we expect to ever be treated as something other than war-mongering Islamophobes, then we need to forgive the former Soviet Union.