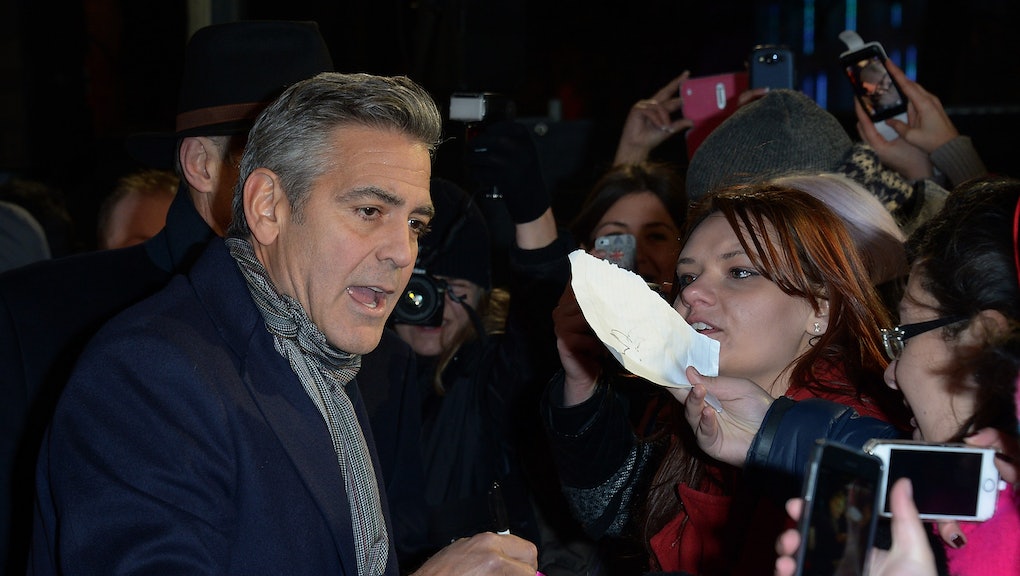 The term "repatriation of Parthenon's marbles" would normally mean little to non-Greeks. But when George Clooney broached the subject last week at a press conference for his new movie The Monuments Men, the world had to pay attention.

And when co-stars Bill Murray and Matt Damon also backed the return of the marbles from the British Museum to the Greek government, many turned to Google to find out what was going on and why Britain was suddenly accused of "looting" ancient art.

"I did a little research just to make sure I wasn't completely out of my mind," said Clooney himself when asked by reporters at a London press conference.

To be fair, it was a Greek reporter that initially raised the issue at a press conference in Berlin the weekend before. The matter was relevant since Clooney's new World War II action drama focuses on the true story of a group of Americans trying to rescue artistic masterpieces from the Nazis in order to return them to their rightful owners.

The Greek media was exhilarated because Greeks claim to be the rightful owners of the 2,000-year-old marbles currently held by the British Museum. Of course, the museum disagrees.

These are the facts: In the early 1800s, important statues and sculptures were removed from the Parthenon by Lord Elgin, British ambassador to the Ottoman Empire. Greece was part of the Ottoman Empire at the time and Lord Elgin received permission from Ottoman authorities to remove the sculptures. The marbles ended up in the British Museum and Greece has been trying to get them back ever since.

This isn't just a Greek issue: it is an international one, as tens of countries around the world are on a mission to repatriate their "stolen" art.

Egypt is trying to repatriate the Rosetta Stone, currently held in the British Museum. Peru led a long and eventually successful fight to retrieve artifacts that belonged in Machu Picchu from Yale University. And in December 2013, the Annenberg Foundation purchased 24 sacred Native American artifacts from an auction house in Paris, totaling $530,000, for the sole purpose of returning them to their rightful owners, the Hopi Nation in Arizona and the Apache tribe.

But as far as the Parthenon's marbles are concerned, this has been a forgotten debate, until a movie star of Clooney’s caliber brought it up, according to Emmy Award-winning, Greek-American media personality Maria Papadakis.

Clooney showed what the American Hellenic Institute had been advocating for the past decades: The repatriation of the marbles is an issue of cultural identity and thus has international value.

"It is not only a matter of aesthetics; it is about the fragmentation of what the integrity of a cultural object signifies for the people," says Miltiadis Sarigiannidis, Assistant Professor in Public International Law at the Faculty of Law of the Aristotle University of Thessaloniki.

"Imagine the torch of the Statue of Liberty being a permanent exhibit at The British Museum. The Lady wouldn't have been the same … The Lady at the entrance of the New York harbor is not for sale, because of its importance as a significant cultural object," says Srigiannidis.

Imagine the Mona Lisa being cut in pieces and exhibited in museums all over Europe, says Papadakis, using the famous metaphor that the late author, Christopher Hitchens used in his book The Parthenon Marbles: The Case for Reunification.

"You would go to Germany to see the Mona Lisa smile, to Italy to see her eyes and to Greece to see the background of the masterpiece. Would the experience of seeing the painting even be the same?" asks Papadakis.

In the case of the Parthenon sculptures, the separation is even more absurd: "… the body of the goddess Iris is at present in London, while her head is in Athens. The front part of the torso of Poseidon is in London, and the rear part is in Athens. And so on," wrote Hitchens.

In a comedy video, the international movement for the repatriation of the marbles called "Bring them back" features a Greek businessman stealing the clock of the Big Ben and bringing it to Greece supposedly to protect it.

In light of the Greek financial crisis, the financial utilization of Greece's ancient treasures takes on a different meaning. It becomes an important vehicle for job creation, enhancing tourism and boosting the economy. The Greek government even considered renting out ancient ruins, including the Acropolis, to find much-needed cash to pay for their maintenance.

So, should the Greeks take the issue to court?

"But litigation is an option that will create tensions between the governments," he adds.

Especially in light of its sovereign debt crisis, fighting about art is the last thing that Europe wants to show to the world.