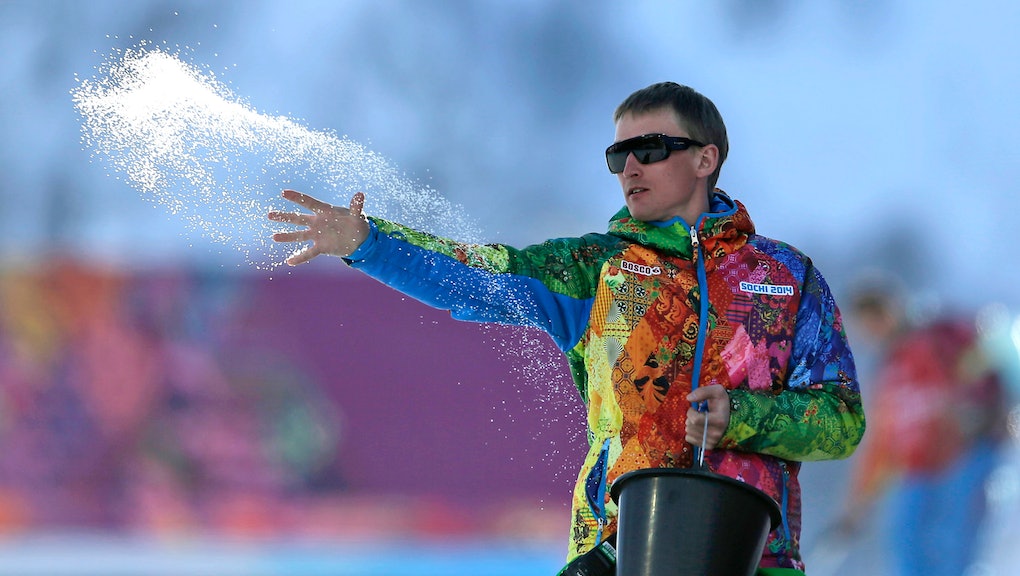 This "Mission: Impossible" Operation Saved Sochi From a Snow Crisis

Much has been made of Russian Olympic organizers' attempts to secure enough snow to turn the subtropical resort of Sochi into a wintry landscape. A big chunk of the $51 billion budget has gone into securing state-of-the-art equipment to generate and preserve snow: enormous snow machines, climate control technology and even stockpiles of snow kept under cooling sheets in the mountains.

But all that money and hard work was almost undone due to the lack of a simple, but crucial ingredient: salt.

On Sunday, the New York Times published a behind-the-scenes account of Sochi's salt crisis — and of the Mission: Impossible-level international operation that averted the disaster.

The story began four months earlier when Hans Pieren, Sochi's snow expert, warned organizers that they didn't have enough salt to maintain the outdoor courses. Pieren, a former Swiss alpine skier and Olympian, put in an order for 19 tons of salt. For some reason or another, Sochi organizers did not fill his request.

It was last week that officials at Sochi finally realized how dire the situation had become. Because there wasn't enough salt — less than a ton — to melt and refreeze snow into a hardened surface, the outdoor venues were turning into mush. The temperatures were rising, the athletes were complaining and the courses were quickly becoming unusable:

To top it off, large-grain salt simply could not be found in Russia in the quantities that Sochi needed. So after an emergency meeting, Pieren called a contact at Schweizer Rheinsalinen, a salt company in Switzerland. The company agreed to sell 24 tons of salt to Sochi. The cost? Just a little more than $3,500.

The problem now was shipping all the salt to Russia. FIS-Ski, the international ski federation, reportedly rerouted a Bulgarian plane to Zurich to make the delivery. But the salt company missed the deadline, and a second plane had to be chartered for the pick-up.

After the plane successfully landed in Sochi, Russian officials had to bend the rules to speed up the customs process. A rushed security check allowed Sochi organizers to drive the 24-ton supply of salt right up the mountain — within 24 hours of that emergency meeting. The staff quickly went to work to spread the salt over the courses.

Though the last-minute mission may have been harrowing and frustrating for some, others were happy that they pulled it off successfully.

"I was surprised to work for the Olympics," said Marcel Plattner, a sales accountant at Schweizer Rheinsalinen. "That's the reason I got a bit emotional. Our whole company and our logistics department was lucky to do something for a good reason, for the Olympic Games."

We can't wait until an Argo-style Hollywood adaptation of this story comes out.