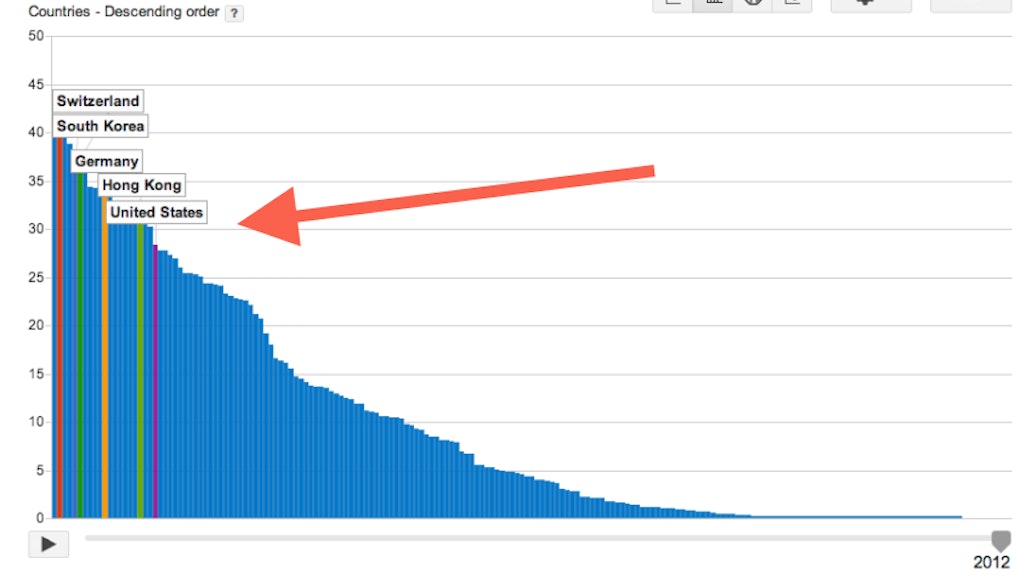 The Comcast-Time Warner merger has many of us wondering just how good our Internet service really is. Since most of us pay exorbitant cable fees, are we getting the best bang for our buck? The short answer is no.

As PolicyMic previously reported, "[t]he World Economic Forum has ranked the U.S. (the inventor of the Internet) a pathetic 35th out of 148 countries worldwide in terms of broadband Internet bandwidth capacity" while we rank "58th out of 90 countries for cost of broadband." Now this graph from Google illustrates more of the same:

The graph, which pulled data from the International Telecommunication Union, shows the percentage of population in each country with access to high-speed Internet. Leading the pack are European countries such as Monaco, France, Germany, U.K. and most of the Nordic states. Non-European countries in the top include South Korea and Hong Kong.

As for North America, Canada pulls far ahead with 32.48% of the population with high-speed Internet, in comparison to the U.S.'s 28.35%.

In fact, the U.S. just manages to beat New Zealand, Saint Kitts and Nevis and Belarus.

Just why exactly does our Internet connection suck so much? Most of the cable industry is dominated by an oligopoly, which hikes prices at will and uses its resources to squeeze out competitors who are trying to introduce innovation into the market. With the new merger, Comcast-Time Warner will have no incentive to upgrade its services: It can keep demanding more money from its existing userbase, since most people don't have actual alternatives. We'll just keeping paying more and more for suckier service, while our international peers leave us behind to eat the dust.