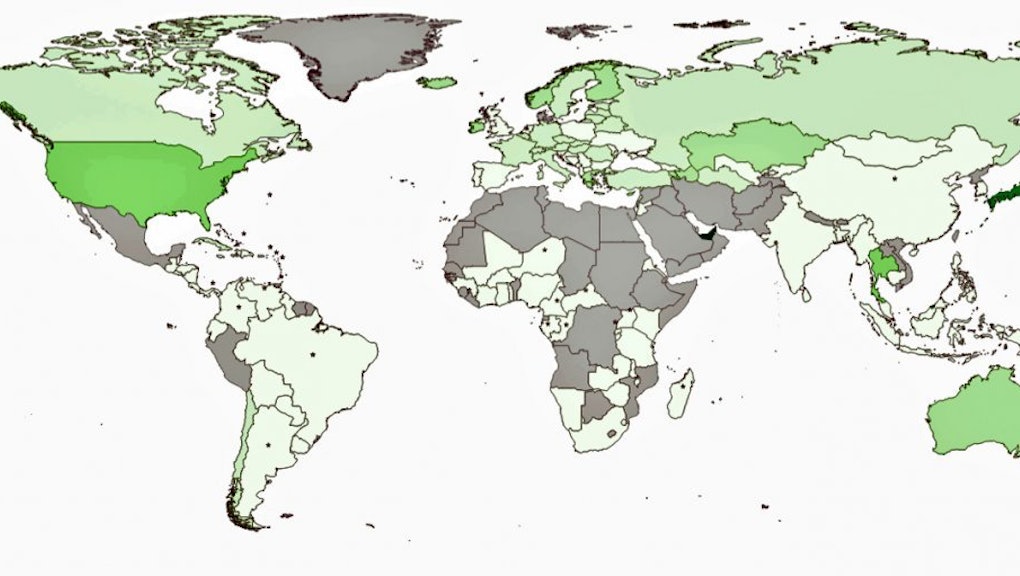 Thanks to PriceOfWeed.com, you might already know how much the fair trade value of some real primo dank is in your neighborhood. But for the international value, you're going to need to need to turn to the real experts — the United Nations' Office on Drug and Crime, which tracked the average worldwide price of cannabis in its 2013 World Drug Report.

Business Insider developed the map above based on the UN's data, finding that prices fluctuate widely. In most of South America and Africa? Weed is less than a dollar a gram. In Richie Rich-estate-like Lichtenstein, however, it's an astonishing $1020 a gram. (This makes me want to quit my day job and start trafficking weed to the rich young scions of international finance.) Other expensive areas were Bermuda ($124 per gram — but probably mostly for the tourists), the United Arab Emirates ($110 per gram, but it's very harshly punished), Brunei ($80 per gram), and Japan ($70 per gram).

In not-so-sunny Russia, a gram of weed will typically set you back around $11, which might go great in Sochi along with that $5.36 bottle of gin:

The United States fluctuates widely, but the UN estimated it as up to $1,800 an ounce — or around $63.50 a gram, which seems more than a little high based on our anecdotal research. The lower boundary appears to be around $7 a gram, which makes for quite a large data range. Specifically, the posters at Grasscity seem to think anything more than $20 a gram is a ripoff, so if you find yourself going anywhere near $63.50, you might be a sucker.

But with the worldwide consensus on marijuana prohibition slowly eroding, those high prices might not last for very long.