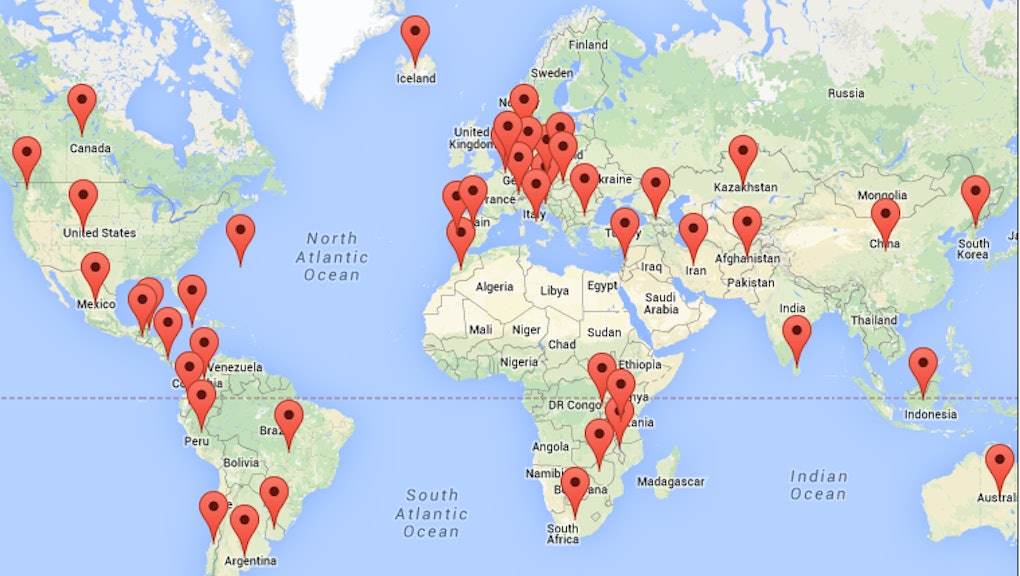 The Marijuana Legalization Tidal Wave is Coming — See This Map

One might not expect a website called weedblog.eu to be particularly profound. However, in addition to posts about “the best weed you ever smoked” and “the latest cannabis discoveries that governments don’t want you to know,” the site recently posted a map that elegantly displays an ongoing, historic, and unprecedented sea change: the world's evolving consensus about the prohibition of marijuana (click the image to see the interactive map).

The map pins news stories from 44 countries (and one satirical piece about Iran), showing both the widespread nature of the changing consensus, and regional pushes to change legislation as individual countries escape the yolk of American influence (after all, marijuana prohibition was a mid-century project led by one country, and one man).

In South America, for instance, Uruguay’s recent decision to not just decriminalize but officially legalize marijuana — making it the first country in the world to do so — has put it in the vanguard, and its fellow Southern Cone countries may well follow suit. Addressing Uruguay’s new policy, Argentina’s drug czar, a Catholic priest named Juan Carlos Molina, stated that, “Argentina deserves a good debate about this. We have the capacity to do it.” Even conservative Chile — a country that didn’t legalize divorce until 2004 — has considered legislation to legalize the drug.

In North America, Colorado’s recent legalization of marijuana and the resulting market boom have turned eyes toward the profit margins made possible by legal weed. Canada, for its part, is transitioning from small-scale medical marijuana production to a $1.3 billion market composed of large-scale, government-certified indoor farms, while Mexico City is considering both decriminalization of the drug and legalization of growing clubs.

Elsewhere, countries as disparate as China, Kazakhstan, and Zimbabwe are considering loosening restrictions in order to export, and cash in on, the crop, Lebanon is permitting cannabis fields to grow as it turns its attention to more pressing concerns, and Afghanistan continues to lead the world in exporting not just opium, but hashish.

In Europe, loosened regulations are coming in the form of decriminalization, which was pioneered by Portugal in 2001, and of the creation of "cannabis social clubs," as in Belgium, wherein club members can cultivate and consume their own marijuana, but cannot sell or distribute weed to outsiders. However, while many European countries have long had more relaxed attitudes toward marijuana than the United States, the drug remains illegal throughout the continent. Among Europe’s current leaders, only the president of Iceland, Olafur Ragnar Grimsson, has come out in favor of full legalization.

Taken as a whole, the map paints a picture of a moment akin to the end of prohibition, in which the world is slowly but surely turning away from the 20th century’s misguided crusade against marijuana. Instead, country after country is tentatively looking toward a future in which cannabis is seen as the crop that it is, and not the menacing bogeyman that it never was.