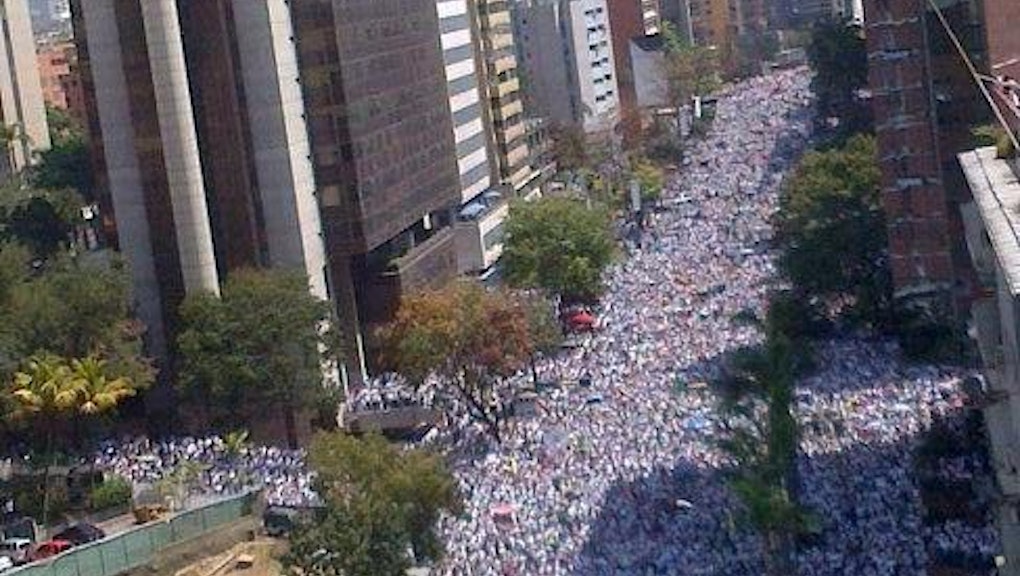 This Is What's Happening in Venezuela Right Now

There is a crisis in Venezuela. Already one of the most violent places on Earth — a person is murdered every 21 minutes, and there were roughly 24,700 violent deaths last year — the country is in the throes of a massive shake-up.

For the past few months, Leopold López has led an opposition movement against President Nicolas Maduro's government, which has been running the country into the ground. Since taking over for the deceased Hugo Chávez in April 2013, Maduro has led Venezuela to 56% inflation rate and a 50% increase in the budget deficit, prompting China to cut back on its $20 billion loan, and Moody's and Standard & Poor to downgrade Venezuelan bonds to "junk" status. Additionally, the once-strong dollar has dropped from an 8 to 1 exchange rate relative to the U.S. dollar at Chávez's death, to a disastrous 87 to 1. In response, Maduro has taken to blaming U.S.-backed "fascists" and the "parasitic bourgeoisie." He has also called for more state intervention. This has only made things harder for the private sector, which has since made it nearly impossible for Venezuelans to get food and other basic material necessities.

Consequently, people like López have been leading dissatisfied Venezuelans in protest. But it wasn't until Venezuela's Youth Day last week that things really took a bad turn. Swarms of young people — mostly aged 18 to 25 — took to the streets to peacefully protest Maduro's poor governance, but state police quickly tried to corral them. At least three protesters were shot dead and many more were injured. Maduro has since charged López with terrorism and murder for inciting the riots where Maduro's government killed people.

Since then, more young people have protested Maduro's government and the awful treatment of the Venezuelan people, especially the young people who have died during these demonstrations. Because of the government's tight control of the news outlets and television networks, very little coverage has seeped out of the country. Young people have been using Twitter and other forms of social media to organize, but the government's crackdown on dissent has been swift and severe.

Maduro and his many arms of government have sworn to put a hard stop to these protests and opposition groups. But the situation is spiraling further and further out of control each day. As Businessweek points out, the last time Venezuela experienced such aggressive instability was during the 1989 Caracazo riots, which led to the regime change that placed Hugo Chávezin power.

Read more: 9 Things You Need to Know About the Protests Rocking Venezuela

Here are some of the latest images from the protests in Caracas — images the Venezuelan government probably doesn't want you to see.